SEOUL, Sept. 17 (Yonhap) -- South Korea on Friday achieved its goal of inoculating over 70 percent of the country's population earlier than scheduled amid its accelerating vaccination drive.

A total of 36 million people have received their first shots of COVID-19 vaccines as of Friday, accounting for 70.1 percent of the country's 52 million-population, while those who are fully vaccinated reached 21.89 million, according to the Korea Disease Control and Prevention Agency (KDCA).

The country beagn its nationwide vaccination campain in late February. 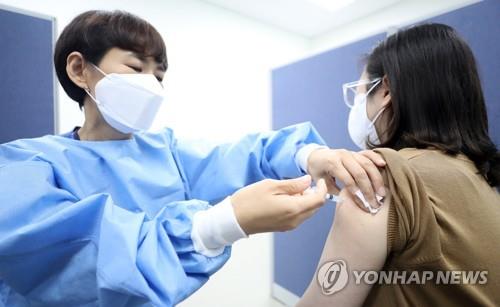 The first-shot vaccination rate of 70 percent was achieved before the Chuseok holiday, which is scheduled for between Monday and Wednesday, as earlier pledged by the authorities, the KDCA said.

Authorities expect vaccinations will further pick up steam going forward, to get 80 percent of all South Koreans inoculated at least once and reach a 90 percent of inoculation rate for those aged 18 or older.

The Seoul government also plans to get 70 percent of the population fully vaccinated by the end of October. It expects the goal to be achieved earlier than estimated.

In order to do so, the government said it aims to provide further perks for vaccinated people, such as increasing the number of people for private gatherings.

While limiting the size of private gatherings and restaurant business hours, they have eased some restrictions to give leeway to vaccinated people.

Currently, those aged 18-49 are receiving their first jabs, following inoculations on priority groups, including the elderly population and healthcare workers.

Despite the drive, authorities note the importance of full vaccination in order to fight again the fast spread of the more transmissible delta variant nationwide.