The test-firing was also conducted to confirm the "practicality of the railway-borne missile system deployed for action for the first time" to judge combat readiness and to "attain proficiency in case of fighting an actual war," the KCNA said.

The KCNA said that Pak Jong-chon, member of the Presidium of the Politburo of the ruling Workers' Party, guided the latest drills, along with other top officials. North Korean leader Kim Jong-un did not oversee the test-firing.

"Our military's assessment is that North Korea has been continuing to develop various forms of transporter launchers," the South's Joint Chiefs of Staff spokesman Col. Kim Jun-rak said during a regular press briefing, adding that an analysis is under way.

The new system is expected to allow the North to have better mobility when firing missiles using its railroad network across the country.

Such a train could also be disguised as a passenger train to avoid surveillance from military satellites, making it harder to detect signs of an imminent missile launch, experts said. 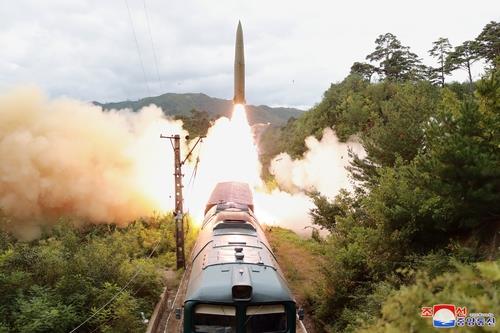