According to the defense ministry, the state-run Agency for Defense Development successfully conducted the combustion test of a solid-propellant engine for space rockets at its test site in the western city of Taean on July 29.

The new engine is designed to put small satellites into a low Earth orbit, which are expected to improve the military's surveillance capabilities.

The engine test took place a year after Seoul and Washington agreed to lift the decades-old restrictions on Seoul's use of solid fuels for its space rocket launch under a revision of the "missile guidelines."

The guidelines were later completely lifted in May this year, paving the way for South Korea to develop or possess ballistic missiles with a maximum range greater than 800 kilometers.

"We have secured a core technology necessary for a solid-fuel space projectile which had been restricted due to the South Korea-U.S. missile guidelines. It is expected to greatly contribute to strengthening our space defense capabilities," the ministry said in a release. 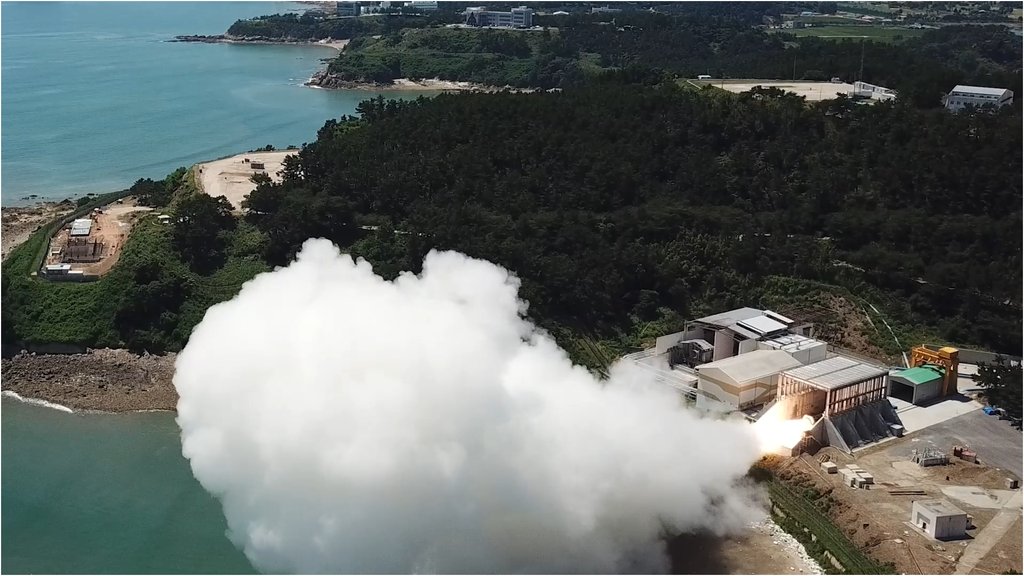 South Korea plans to launch a homegrown solid-fuel space rocket carrying a small 500 kilogram satellite from the Naro Space Center in Goheung, 470 kilometers south of Seoul, in around 2024, it said.

Compared to liquid-engine space vehicles, the solid-based ones are known to be quicker, simpler and more cost effective to launch.

"Based on the technology we secured through the development of the liquid-propellant Nuri space rocket and the swift development of solid-fuel space rocket technologies, we will be able to take a step closer to becoming one of the world's top seven countries with strong space capabilities," the ministry said, citing the United States, Russia, Europe, China, Japan and India as the others.

The government also plans to transfer its newly developed space technologies to the private sector to help boost its space programs.

As part of the efforts, the science ministry said it will build additional infrastructure, such as a new launching site and a rocket tracking system at the Goheung space center.

"The government will continue to push for the development of core technologies, establishment of infrastructure and improvement in systems to support the private-led space programs to boost the country's economy and competitiveness in the science and technology sector," the ministry said.