SEOUL, Sept. 17 (Yonhap) -- Hwang Jae-min checks out his smartphone apps several times a day to search for new homes up for sale so he can move to another house.

When the 41-year-old bought a three-room flat in Yongin, a satellite city south of Seoul, six years ago, he called several real estate agents and went on home tours with them on weekends.

This time, he downloaded several mobile apps offering information about apartment units up for sale, their transaction history, floor plans, as well as transportation and schools.

"I try to collect as much as information on my own to make a shortlist before actually visiting properties," Hwang told Yonhap News. "I don't have enough time to go on a tour of several homes and actually don't think it's a good idea due to the coronavirus." 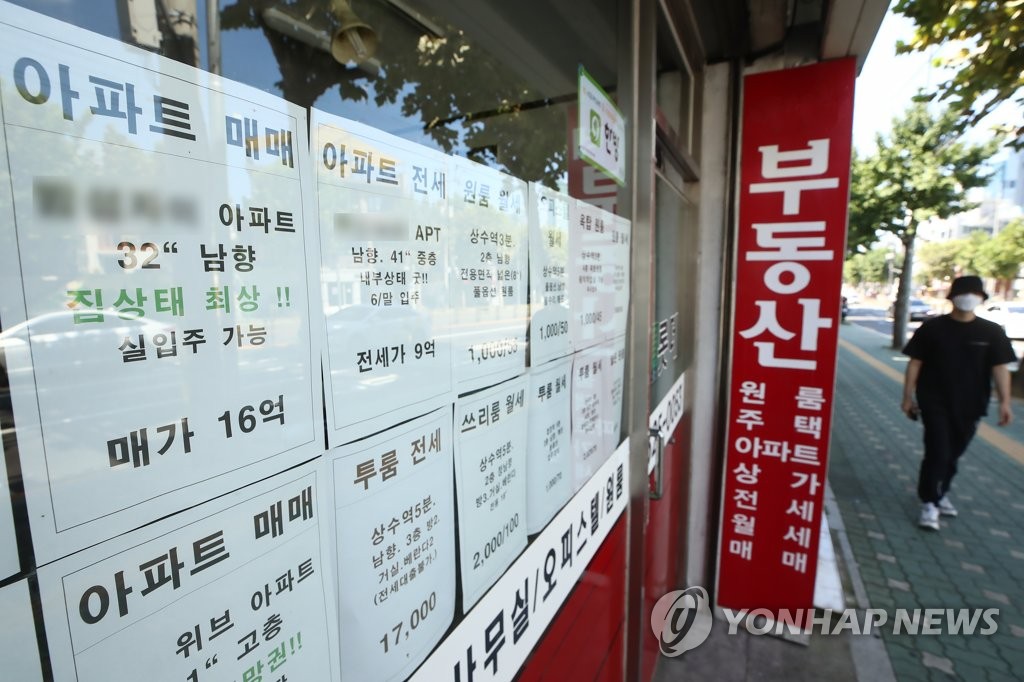 While buying and selling homes involves a complicated decision making process that often requires help from professionals, a diverse range of startups are expanding their presence in the real estate market with easier and more convenient platforms enabled by digital technology.

The real estate industry has resisted change for a long time but is now being disrupted by tech-led startups focused on saving time and money, collectively called "proptech (property technology)."

Among them, Zigbang is a leading home matching platform, which joined the nation's "unicorn" club after it was valued over 1 trillion won (US$855 million) as of July.

After a decade in the industry, Zigbang now wants become a major proptech player with differentiated services based on big data, artificial intelligence and other tech upgrades.

Zigbang said it will scan homes for 3D virtual tours, which would give information about real-time lighting of the day and views to would-be buyers.

It also plans to forge partnership with licensed agents to launch the digitized, contactless home transaction service and join hands with home concierge companies to provide such services as cleaning, refurbishing and exterminating pests.

"The home-related service should evolve from the current platform to the next generation," Zigbang founder and CEO Ahn Sung-woo said in a meeting with reporters. 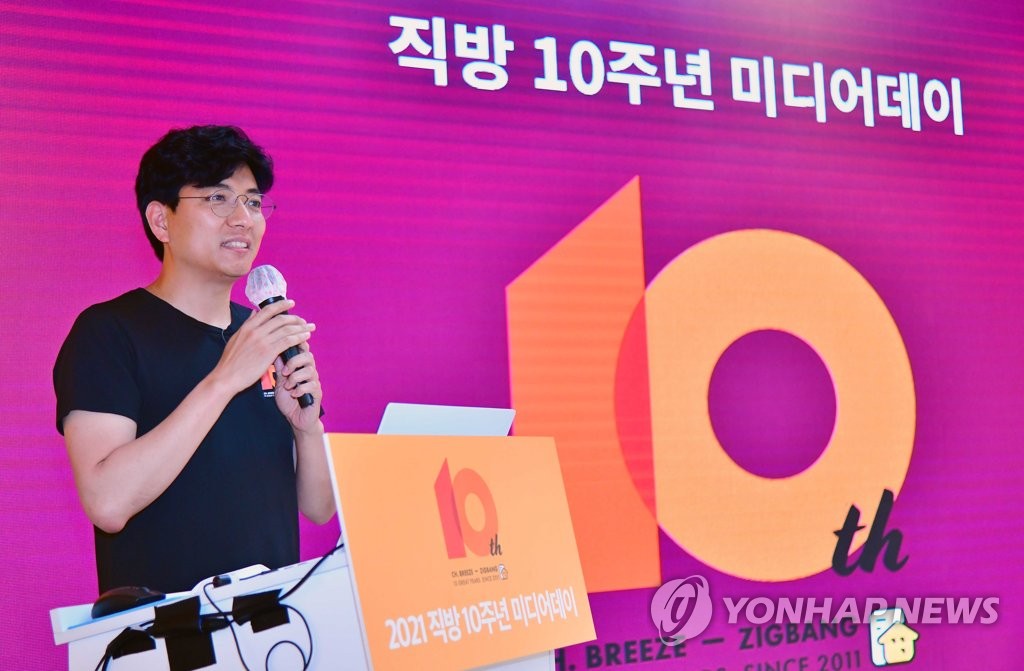 Taking advantage of the less time and money needed to arrange home tours and run real estate offices, some platforms woo customers by connecting them with brokers at lower commission fees.

Dawinproperty, a real estate listing platform, has flexed its muscles in the Seoul metropolitan area since its launch in 2019 by charging lower rate fees to buyers and exempting commissions on sellers.

In South Korea, both buyers and sellers pay brokerage fees ranging from 0.4 to 0.9 percent of the total transaction amount, and the rate for the lease contract ranges from 0.3 to 0.8 percent.

Dawinproperty said it now has over 100,000 users and 1,000 registered agents as more people want to trade homes at cheaper costs amid rising housing prices, which proportionally inflated brokerage fees.

"Shifting from offline real estate transactions to online can save office expenses, which can cut brokerage charges," Kim Seok-hwan, CEO of Dawinproperty, said.

As more people collect data via online and easily compare prices from the comfort of their own homes, they now give a second thought about the role of traditional realtors and whether the broker compensations are worth their service.

"I arranged my loan, consulted with an accountant for tax issues and signed a contract with an interior firm to renovate the new apartment," Kim Su-jin, who recently bought an apartment in southern Seoul. "I feel like real estate agents are getting more money without upgrading their services, just because houses have become more expensive."

In response to growing complaints, the Ministry of Land, Infrastructure and Transport has revised the real estate commission rates, which is set to take effect next month. 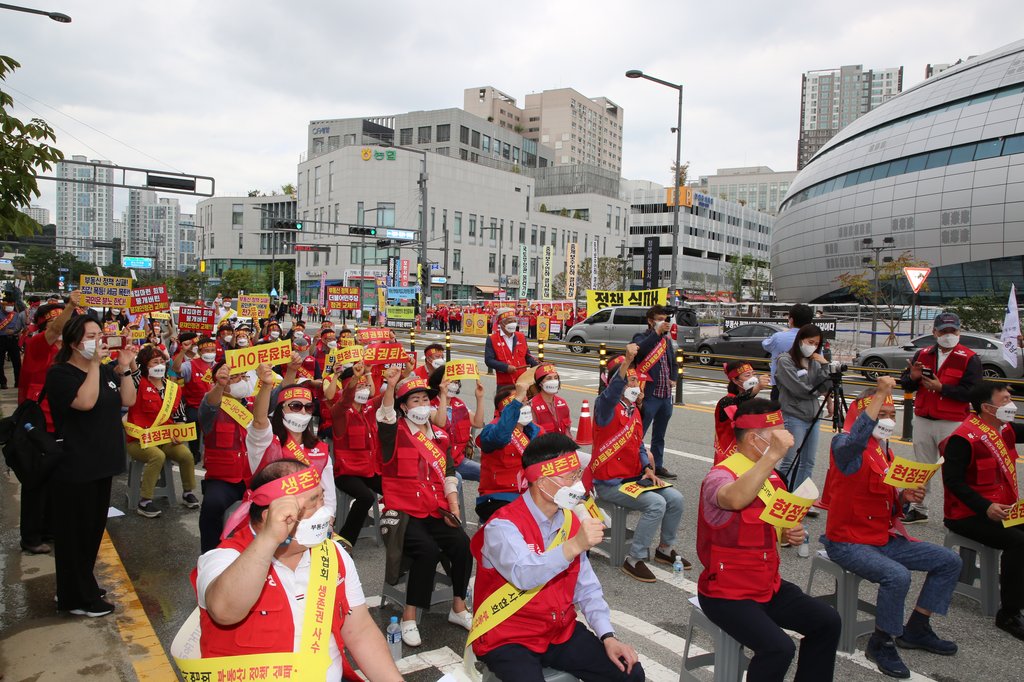 While a 0.9 percent rate cap is currently adopted on properties priced over 900 million won, the new system will break down the ranges to charge 0.5-0.7 percent of the total transaction amount.

As a result, the maximum brokerage fees on the sale of a 900 million won house will be nearly halved from 8.1 million won to 4.5 million won, the ministry said.

The top price band is even lower than the average trading price of Seoul apartments, which rose to the highest- ever level at 1.2 billion won in July, according to the KB Kookmin Bank's real estate data.

The commission rate cap on properties valued over 600 million won was slashed by 0.1 percentage point to 0.4 percent, while those priced below the line would maintain their current cap.

Brokers have strongly opposed the new ceiling on brokerage fees, criticizing the government for passing the buck on them to try to assuage public distrust of its real estate policies.

The Korea Association of Realtors argued the nation's commission rate is very low compared to other countries and realtors are already grappling with falling transactions in the saturated market with about 110,000 registered agents.

Traditional realtors have threatened to take collective action against the government's "unilateral" decision to cut brokerage rates, filing multiple lawsuits against the startups and even pressuring a comedian to drop out of a commercial for Dawinproperty.

Despite the protests, the government said it will stick to its policy and lower regulations on the proptech industry to enhance the transparency and convenience of real estate transactions.

Market watchers say changes are inevitable in the real estate industry, which has been relatively slow to new technology adoption, on rising demand for contactless transactions amid the pandemic and new services enabled by the latest technologies.

"The role of proptech is becoming more important as technology can help ease information asymmetry, the biggest problem in the real estate market," Lee Kyung-ja, an analyst at Samsung Securities, said. "Proptech is expected to evolve from the real estate listing platform to one-stop real estate service to cover all interested parties, including buyers, sellers, agents and financial institutions."