The Seoul High Court sentenced Won, who headed the National Intelligence Service (NIS) from 2009-13 under former President Lee Myung-bak, to nine years in prison for causing losses to the state coffers, violating the law on governing the status of the NIS and abuse of power.

The court also suspended his civil and political rights for seven years.

The sentence was increased from a seven-year prison term and a five-year qualification suspension delivered by the same court last year, as the acquittal of part of his power abuse charges was reversed. 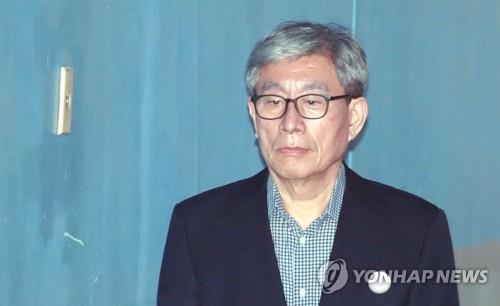 The appellate court previously convicted him of inflicting losses on state coffers by siphoning off about 11 billion won (US$9.3 million) of NIS funds to hire civilians to distort cyberspace opinions and frame liberal groups as pro-North Korean activists in a bid to help previous conservative governments.

He was also found guilty of having given a bribe of about 200 million won to Lee and his brother from the agency's secret fund.

He was indicted on 13 different power abuse charges as well, including ordering NIS agents to shadow the wife of former liberal President Roh Moo-hyun and late former Seoul Mayor Park Won-soon, but the court had cleared him of all of them.

On Friday, the high court found him guilty of power abuse charges he had been acquitted of on top of other previous convictions.

"Won's actions are irrelevant to national security, the reason of NIS' existence, and constitute an interference in politics in violation of political neutrality required for the agency under the Constitution," the court said.

Separately, the former NIS director had his four-year prison sentence finalized by the top court in April 2018 for ordering NIS agents to post online comments to influence public opinion in favor of the Lee administration and then conservative candidate Park Geun-hye during the 2012 presidential election. Park narrowly beat her rival Moon Jae-in to succeed Lee.

After Moon was elected president in 2017 following Park's impeachment over corruption and abuse of power, the prosecution reinvestigated the NIS' past wrongdoings, and Won was indicted on nine occasions between December 2017 and December 2018.