SEOUL, Sept. 18 (Yonhap) -- President Moon Jae-in plans to leave for the United States on Sunday to attend the 76th session of the U.N. General Assembly, according to his office.

He is joining the annual meeting for the fifth consecutive year since his inauguration in May 2017. Last year, the event was held virtually due to the COVID-19 pandemic, and Moon participated in it via video conference.

Moon is scheduled to deliver a keynote speech at the U.N. session in New York on Tuesday (local time).

He is expected to emphasize the importance of international solidarity to overcome the coronavirus crisis, achieve "inclusive recovery" and tackle climate change. 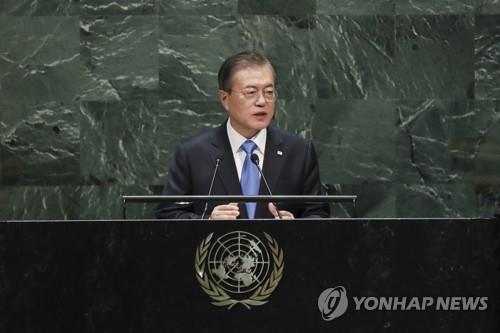 Also drawing attention is his message on regional peace. This year marks the 30th anniversary of South and North Korea becoming members of the U.N.

He may make a fresh overture to Pyongyang in a bid to revitalize the long-stalled Korea peace process. North Korea even resumed ballistic missile testing earlier this week in violation of U.N. Security Council resolutions.

"President Moon will express South Korea's commitment to continuing efforts for dialogue and cooperation to bring peace to the Korean Peninsula and improve inter-Korean relations at the U.N. General Assembly," a Cheong Wa Dae official said. "He will also request continued interest and support from the international community."

On Monday, Moon will attend the opening ceremony of the Sustainable Development Goals Moment (SDG Moment) event, along with the members of BTS, a South Korean boy band that has become a global sensation.

The president appointed them as "special presidential envoy for future generations and culture."

Moon and BTS plan to appeal to the world for closer partnerships to resolve pending global challenges.

Following his activities in New York, Moon is scheduled to head to Hawaii, where a ceremony will be held for the transfer of the remains of South Korean and American troops killed during the 1950-53 Korean War.

It is the first time for a South Korean president to attend a war remains handover ceremony abroad.

"Through the event, (Moon) will reaffirm the South Korea-U.S. alliance and stress (the government's) commitment to unlimited responsibility for those who have sacrificed for the nation," Cheong Wa Dae stated.

Moon is to return to Seoul on Thursday.