SEOUL, Sept. 20 (Yonhap) -- Heavy traffic is expected on highways on Tuesday, the second day of the Chuseok holiday period, with 5.2 million vehicles expected to hit the roads, the traffic agency said.

Traffic on most expressways eased on Monday evening after surging during the day as a huge number of people headed to their hometowns for family reunions and for travel during the extended Chuseok holiday, according to the Korea Expressway Corp.

More than 4 million vehicles hit roads across the country on the day, with 390,000 leaving Seoul and the surrounding metropolitan regions for other parts of the country, the agency said.

This year's Chuseok, the Korean version of Thanksgiving, falls on Tuesday, and the holiday runs through Wednesday. Koreans usually visit their hometowns to get together with family members and visit their ancestors' graves.

Around 32.26 million people are expected to travel during the holiday, and the average daily traffic is estimated at 5.38 million, up 3.5 percent from a year earlier, according to the Korea Transport Institute. But this year's figure marked a 16.4 percent fall compared to 2019, a pre-pandemic year. 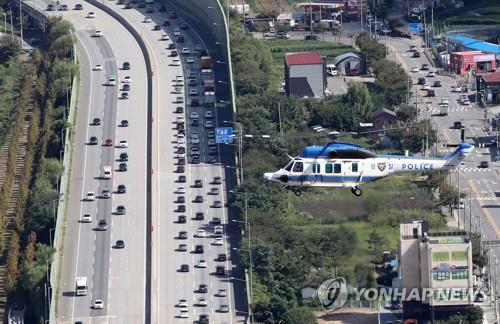