Prime Minister Boris Johnson welcomed progress in consultations on the issue. President Moon Jae-in also said it demonstrates friendly ties between the two sides, as they met each other on the sidelines of a U.N. General Assembly session, according to Cheong Wa Dae spokesperson Park Kyung-mee.

The president expressed hope that the vaccine swap will serve as a chance to further solidify their relations. Park stopped short of providing details including those on the type and scale of vaccines to be exchanged.

Regarding a recent visit by the British aircraft carrier HMS Queen Elizabeth and its fleet to South Korea, Moon said it has contributed to the strengthening of defense cooperation between the two sides.

The two also talked about a new trilateral security partnership among Australia, Britain and the United States, called AUKUS.

Johnson assured Moon that it will not trigger any problem with regard to regional security, and Moon hoped for its contribution to peace and prosperity, Park said. 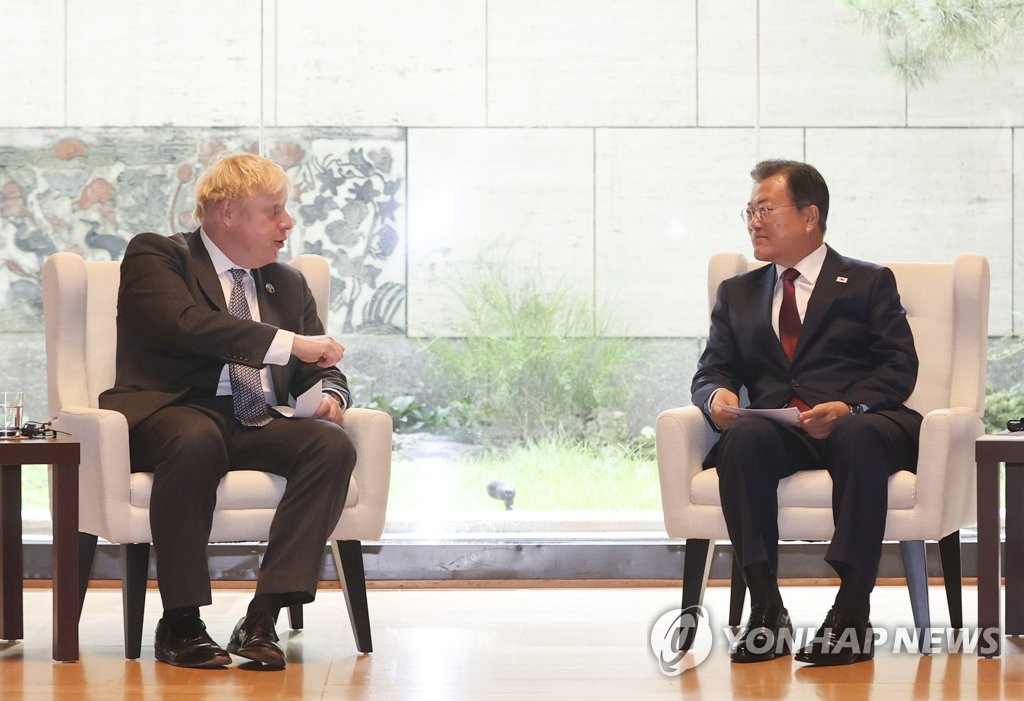 The leaders were holding their second face-to-face summit in about three months, with the previous one held during Moon's trip to the British county of Cornwall in June for a Group of Seven (G-7) summit.

Moon briefed Johnson on Seoul's push for the denuclearization of Korea and establishment of peace.

He requested support from Britain, a permanent member of the U.N. Security Council, so that the Korea peace process can make substantive progress.

The prime minister reaffirmed Britain's backing for the South Korean government's peace drive and agreed to cooperate in efforts to engage North Korea diplomatically, according to Moon's office.

The leaders agreed on closer partnerships between their nations in response to climate change.

The two sides also had discussions on bilateral relations, including trade.