SEOUL, Sept. 21 (Yonhap) -- Long lines of vehicles formed on South Korea's major highways Tuesday as millions of people headed back to Seoul after celebrating the Chuseok holiday with their families in their hometowns.

Korea Expressway Corp. predicted it would take six hours and 30 minutes to drive from the southeastern port city of Busan to Seoul if a traveler departed at 4 p.m. It usually takes around four hours. 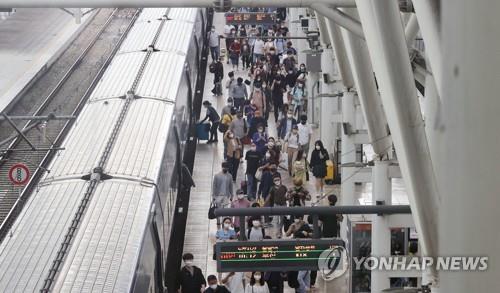 The estimated travel time from the southwestern city of Ulsan to Seoul was six hours and 10 minutes. The estimate for the Gwangju-Seoul route was five hours, and nearly five hours and 30 minutes from Daegu, the authorities said.

Some 5.22 million vehicles will be traveling Tuesday, causing major traffic congestion on highways and roads that is likely to be relieved between 1 and 2 p.m. Wednesday.

This year's Chuseok, the Korean harvest celebration, falls on Tuesday, and the holiday runs through Wednesday. Koreans usually visit their hometowns to get together with family members and visit their ancestors' graves.