The U.S. president made the remark shortly after he said the U.S. will return to full compliance of the nuclear deal with Iran should the Middle Eastern country chooses to do so.

"Similarly, we seek serious and sustained diplomacy to pursue the complete denuclearization of the Korean Peninsula," Biden said while delivering his first in-person remarks at the U.N. General Assembly in New York.

"We seek concrete progress toward an available plan with tangible commitments that would increase stability on the peninsula and in the region, as well as improve the lives of the people in the Democratic People's Republic of Korea (DPRK)," he added, referring to North Korea by its official name. 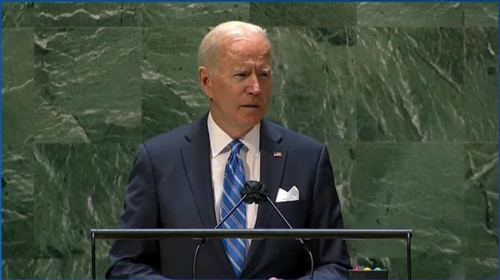 His remark comes amid U.S. outreaches to North Korea.

"We have said repeatedly that we're prepared to meet with the North Koreans without preconditions, and we would hope that they would respond positively on this, but sadly, to date, they have not," a senior State Department official on international organizations affairs, Erica Barks-Ruggles, said Monday.

North Korea has stayed away from denuclearization talks with the U.S. since early 2019.