WASHINGTON/SEOUL Sept. 22 (Yonhap) -- U.S. Secretary of State Antony Blinken will hold trilateral talks with his South Korean and Japanese counterparts on the sidelines of the U.N. General Assembly in New York this week, the State Department said.

The three-way talks with Foreign Ministers Chung Eui-yong and Toshimitsu Motegi, respectively, will take place at Palace Hotel in New York City on Wednesday afternoon (New York time), according to the department's website.

A foreign ministry official in Seoul confirmed the talks are taking place.

"The secretary and ministers of the three countries will discuss the Korean Peninsula issue and other regional and global matters," the official said.

The upcoming talks among the three come about four months after they last held trilateral talks on the margins of the Group of Seven (G7) foreign and development ministers' meeting in Britain in early May, to which South Korea was invited as a guest.

The planned talks in New York are expected to include discussions to follow up on the U.N. speeches by Presidents Moon Jae-in and Joe Biden regarding North Korea's denuclearization and Seoul's peace efforts.

During his U.N. speech on Tuesday, Moon proposed that the two Koreas and the United States, probably joined by China, declare a formal end to the 1950-53 Korean War, saying it will mark a pivotal point of departure in creating a new order of reconciliation on the Korean Peninsula.

Biden said in his speech that the U.S. will seek "serious and sustained diplomacy" to pursue the complete denuclearization of the Korean Peninsula.

The planned trilateral talks also come after the North test-fired two short-range ballistic missiles last week, days after it test-fired a new type of long-range cruise missile, amid signs of the reactivation of its nuclear reactor and uranium enrichment facility inside the Yongbyon nuclear complex.

The three are also likely to discuss other regional and global issues, including China's assertiveness and the situation in Afghanistan. 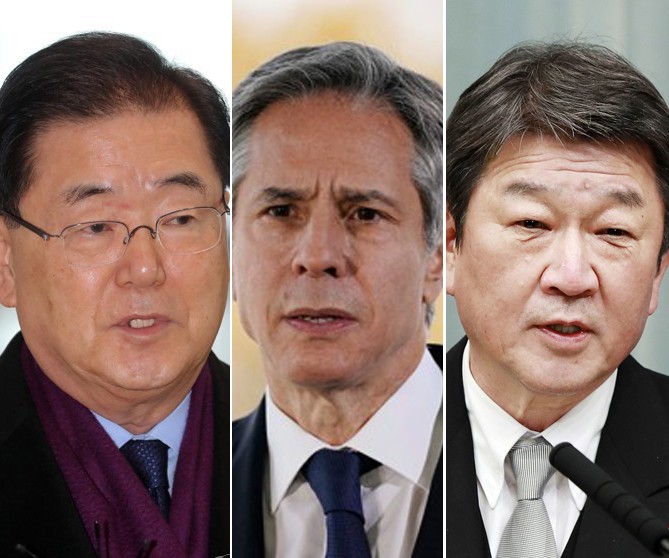