In an unusual move, he publicly mentioned the names of signatories to the envisioned declaration, as he addressed the 76th session of the U.N. General Assembly in New York on Tuesday. 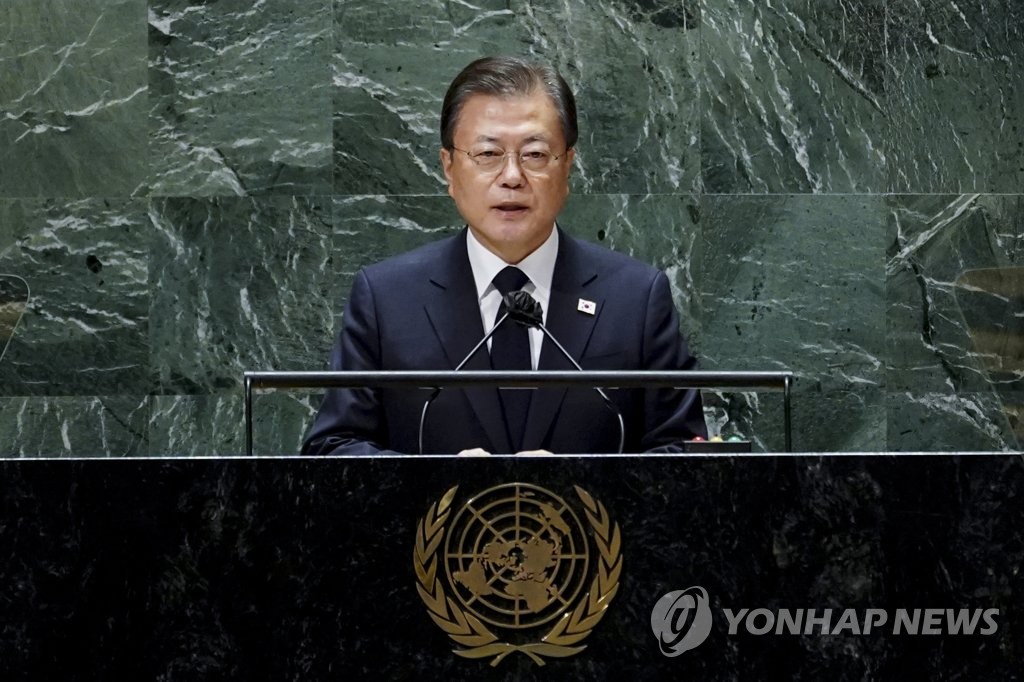 Moon made similar suggestions in 2018 while at the podium during that year's annual U.N. session and he delivered a speech via video conferencing last year, but he did not refer to the concerned parties by name.

In the 2019 session, he reaffirmed the three-point principles on resolving issues related to the peninsula -- zero tolerance for war, a mutual security guarantee and co-prosperity. He then presented a "peace economy" vision based on the transformation of the Demilitarized Zone (DMZ) into a peace zone and the creation of an East Asian Railroad Community.

This year, he was more emphatic about the significance of what is widely viewed as a largely symbolic and political declaration.

More than anything, he stated, an end-of-war declaration will mark a pivotal point of departure in creating a new order of reconciliation and cooperation on the Korean Peninsula.

"When the parties involved in the Korean War stand together and proclaim an end to the War, I believe we can make irreversible progress in denuclearization and usher in an era of complete peace," he added during the 15-minute speech.

Moon also asked the international community to embrace North Korea for dialogue in a "cooperative spirit." He repeatedly used the expression "global community"

In September exactly 30 years ago, the two Koreas won the U.N.'s approval for their membership together, he pointed out.

The president initially sought a joint event with North Korea at the U.N. to commemorate the anniversary but Pyongyang was unresponsive, according to an informed source. The North even resumed its ballistic missile testing last week. 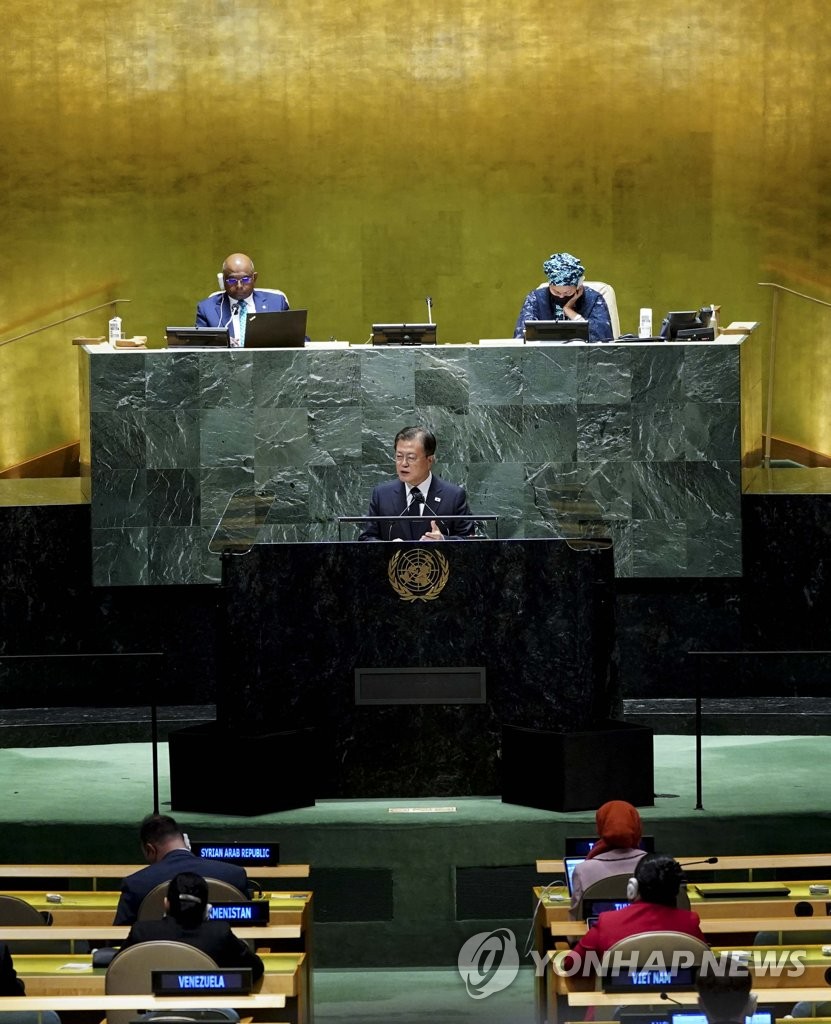 Moon avoided remarks on the North's latest provocation in his U.N. address. He instead called for the reactivation of an inter-Korean program to get families living on different sides of the Demilitarized Zone reunited.

The move is seen as aimed at jump-starting the long-stalled Korea peace process. It reflects a sense of urgency to stop the tensions from further escalating and bring the North to the dialogue table.

It also appears to be intended to demonstrate his resolve not to give up his peace drive, which once had momentum, until his tenure finishes. It was a message for both Pyongyang and Washington.

"Toward building a Korean Peninsula that promotes shared prosperity and cooperation, I will make ceaseless efforts until my very last day in office," he stressed. He has only about eight months in office, with his successor, either liberal or conservative, to be elected in March 2022.

On the other hand, Moon's reiteration of the call for the end-of-war declaration indicates that he has no fresh realistic incentive to offer for Pyongyang.

In fact, the feasibility of Moon's push is in doubt. It is uncertain whether North Korea is still interested in the end-of-war declaration.

Pyongyang may issue a related message through its state media after the Chuseok holidays.

Kim Song, North Korea's top envoy in New York who is representing his country for the U.N. meeting, is scheduled to deliver a keynote speech next Monday.

U.S. officials under the Donald Trump administration were lukewarm on Moon's proposal for an end-of-war declaration.

It was not immediately known whether the Moon administration had prior consultations on the issue with President Joe Biden's team that is seeking a "calibrated, practical approach" toward Pyongyang.

"We seek serious and sustained diplomacy to pursue the complete denuclearization of the Korean Peninsula," he said. "We seek concrete progress toward an available plan with tangible commitments that would increase stability on the Peninsula and in the region, as well as improve the lives of the people in the Democratic People's Republic of Korea."