HONOLULU, Sept. 22 (Yonhap) -- South Korean President Moon Jae-in has received the remains of 68 Korean soldiers, killed in the 1950-53 Korean War, from the United States in a ceremony in Honolulu.

South Korea also handed over five sets of American service members' remains to the U.S. during the joint repatriation ceremony held at Hickam Air Force Base in Hawaii.

The Defense POW/MIA Accounting Agency (DPAA) hosted the event, along with the South Korean defense ministry's Agency for KIA Recovery and Identification, and Moon "organized" it in person, according to Cheong Wa Dae.

He became the first South Korean president to organize such a remains handover ceremony abroad, it added.

Moon was on a visit to Hawaii following a New York trip for a U.N. General Assembly session. 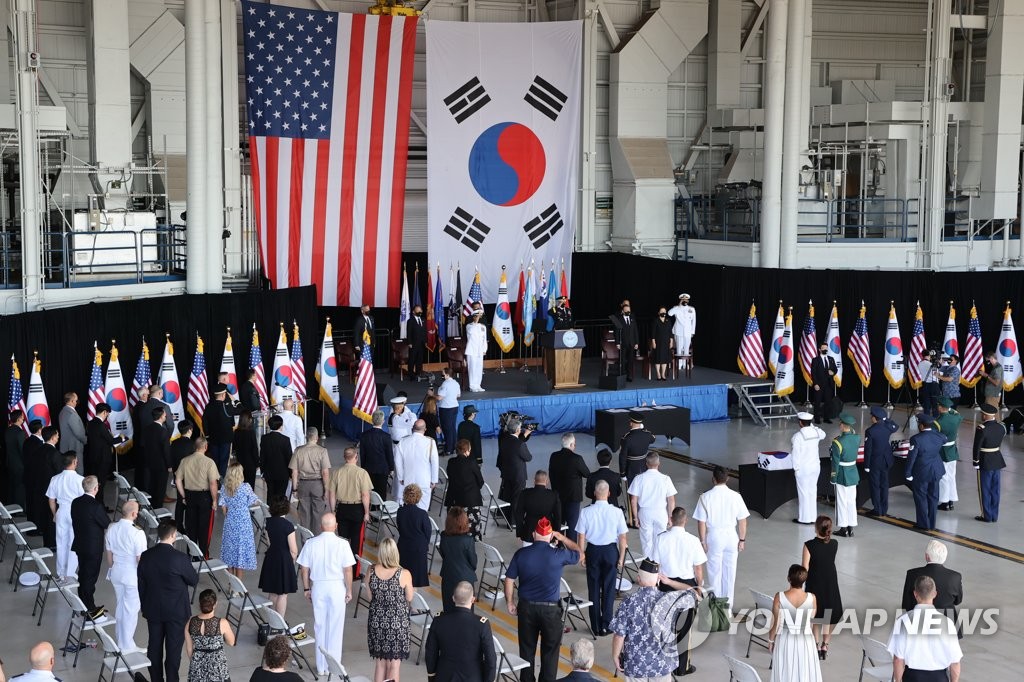 The remains of two soldiers who have been identified -- Pfc. Kim Seok-joo and Pfc. Jung Hwan-jo -- will be transported on Moon's presidential jet, as he is scheduled to head to Seoul later in the day. The caskets containing the remains will be placed on the seats of the aircraft in a show of respect for "the heroes" even while in flight, according to Cheong Wa Dae.

The two were serving at the 32nd Infantry Regiment of the U.S. Seventh Division under the Korean Augmentation to the United States Army (KATUSA) Soldier Program. They were killed in the Battle of Chosin Reservoir in 1950.

Their remains were discovered by North Korea and sent to Hawaii, along with those of American soldiers. The remains were identified in early September.

South Korea's military will carry the other 66 sets of remains, still unidentified, on a KC-330 Cygnus Multi Role Tanker Transport, with Defense Minister Suh Wook aboard.