SEOUL, Sept. 23 (Yonhap) -- Two Army members and a Marine tested positive for the new coronavirus, the defense ministry said, the latest in a series of infections at barracks across the country.

One Army officer and a soldier, both stationed in the city of Pocheon, north of Seoul, were confirmed to have been infected following their recent vacation, according to the military.

The Marine in Gimpo, west of Seoul, tested positive after showing symptoms consistent with COVID-19, it added.

The latest cases brought the total caseload to 1,714, with 1,660 individuals fully recovered, the ministry said.

Nationwide, South Korea added 1,716 new infections Thursday, according to the Korea Disease Control and Prevention Agency (KDCA). The caseload stayed above 1,700 for the third straight day amid the persistent fourth wave of the pandemic that began in early July. 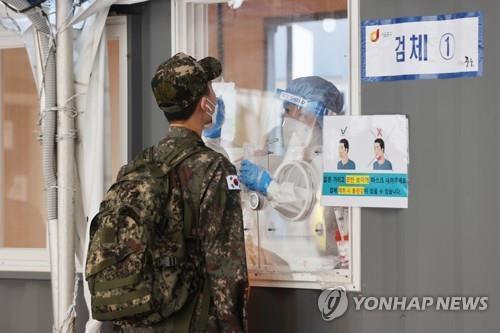