SEOUL, Sept. 24 (Yonhap) -- The prosecution on Friday indicted a 56-year-old man on charges of killing two women while he was under a location monitoring program for sexual offenses.

The suspect named Kang Yoon-seong turned himself in to the police in southern Seoul on Aug. 29 and confessed to murdering two acquaintances for money issues.

According to investigators, he killed one woman while wearing an electronic ankle bracelet and slew the other while on the run after cutting off the device.

The Seoul Dongbu District Prosecutors Office indicted Kang on seven counts, including murder, fraud, robbery and tampering with the anklet. 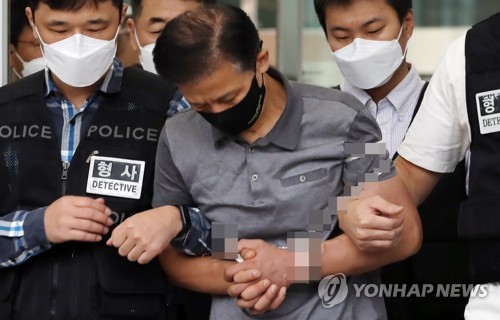 Kang, with 14 previous criminal convictions, was released from prison in May after serving 15 years for sexual assault.

Considered at high risk for recidivism, he wore the anklet, which tracks the wearer's whereabouts and sends signals to the authorities if they leave specified areas.

Prosecution said he killed the first victim at his home on the morning of Aug. 26 after she refused to lend him money.

He used her credit card to buy four mobile phones worth about 6 million won (US$5,100) and resold them. He removed the electronic device in the afternoon and ran away, according to prosecution officials.

He killed the second victim in a car at 3:30 a.m. on Aug. 29 after she said she would report him to the police if he does not pay back 22 million won he owes her, they said.

The prosecution said he was analyzed to have antisocial personality disorder with psychopathic tendencies.

Man indicted for killing two women while under surveillance

Man indicted for killing two women while under surveillance