SEOUL, Sept. 24 (Yonhap) -- The prosecution has opened a criminal probe into a highly lucrative land development project in Seongnam that began in 2015, a case that could provoke a political firestorm ahead of the 2022 presidential election and potentially jeopardize the presidential bid of Gyeonggi Gov. Lee Jae-myung, the front-running presidential contender for the ruling party.

The investigation was officially launched after Lee's camp filed a complaint against some key members of the main opposition People Power Party (PPP) earlier this week for violating the Public Official Election Act by "repeatedly spreading false information" about Lee in order to "knock him out of the presidential race."

The accusations came as the PPP sought to launch a counterattack at the ruling party after the PPP's leading presidential hopeful, Yoon Seok-youl, was mired in a political meddling scandal.

Lee has recently come under growing scrutiny over accusations he gave business favors to certain companies to join the development project in the city's Daejang district when he was the city's mayor. Lee is currently leading the ruling Democratic Party's primary to pick its flag-bearer for the 2022 presidential election. 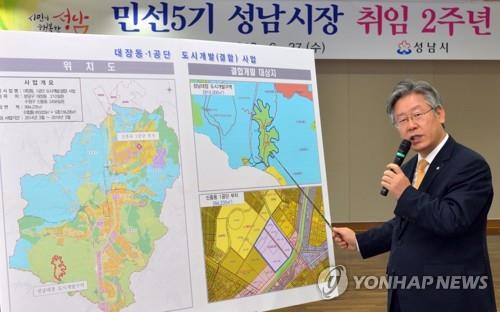 On the 920,000-square-meter land, formerly mountains and farmland, high-rise apartment buildings and infrastructure have been under construction since the development began years ago. The district is located next to the Pangyo Techno Valley, a startup cluster just south of Seoul, which houses more than 1,100 technology companies.

The allegations pointed to a possible personal connection between the governor and the project, from which a handful of companies, including Hwacheon Daeyu Asset Management, with a combined capital of 350 million won (US$297,063), reaped substantial gains of more than 400 billion won in dividends. Hwacheon Daeyu, a privately-held firm, in particular, has been paid a total dividend of 57.7 billion won over the course of three years.

The asset management played a key role in leading the project, even though it held only one percent of share in the public developer, Seongnam's Yard Corporation, which was co-founded in 2015 by a consortium led by Hana Bank and state-run Seongnam Development Corporation (SDC). 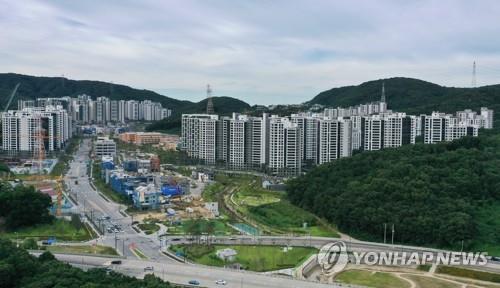 Lee's opponents claim many questions remain unanswered on how the newly established company with no history in the land development business was approved so quickly to join such a big project in the first place, and whether the city's purportedly "public development" scheme was designed to help the company and some individual investors make excessive profits.

The governor, who is not a subject of the current investigation, has flatly denied the allegations against him, saying he would step aside if he was found to "earn personal profits" from the project and he was willing to be investigated over the allegations if needed.

"There were neither business favors nor irregularities. It should be billed as an exemplary project, and it is not right to take issue with (rightful) dividends for private investors," Rep. Jung Sung-ho from Lee's camp said, appearing on a radio show last week.

Even so, the PPP and the conservative minor People's Party upped the political ante by unanimously calling for a special parliamentary probe. The two parties also proposed a bill to the legislature Thursday to appoint an independent counsel to lead the investigation.

Ethical and legal questions were also raised regarding former Supreme Court Justice Kwon Soon-il, who served as a legal counsel to Hwacheon Daeyu after he retired in September last year. Two months before his retirement, Kwon ruled in favor of the governor in a high-stakes case that eventually saved his governorship and political career. A lawyers' group filed a complaint Thursday against Kwon, alleging the former justice's serving at the company constitutes a receipt of bribery. Kwon recently quit the asset management.

Separately from the prosecution's investigation, the National Police Agency have been looking into the firm's finances after being informed by the Korea Financial Intelligence Unit in April of a suspicious flow of funds at the company.

During a session of the Legislation and Judiciary Committee Friday, Justice Minister Park Beom-kye said key to the investigation was the discovery of "who is the real owner of Hwacheon Daeyu and whether there was any preferential treatment."

He added, "I believe the truth will come out during the fact-checking process of the investigation."