SEOUL, Sept. 24 (Yonhap) -- Regional health authorities outside of the greater Seoul area are getting increasingly jittery over a spike in their daily tallies of new COVID-19 cases following this week's extended Chuseok holiday, officials said Friday.

More than 30 million South Koreans are believed to have visited their hometowns or have taken trips during this year's Chuseok, the autumn harvest celebration, which ran from Monday to Wednesday and was extended by a preceding weekend.

Fears that simultaneous gatherings of people at homes and tourist spots would further heighten the chances of COVID-19 transmissions appear to be becoming reality, as new daily coronavirus cases in South Korea soared to an all-time high of 2,434 on Friday. 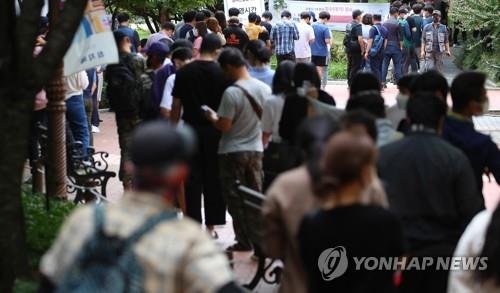 Worryingly for regional authorities, the proportion of non-capital areas in the nation's new daily COVID-19 cases surged to 27.7 percent, or 669 cases, on the day from around 20 percent in recent months.

Quarantine experts warn that the simultaneous increases in new COVID-19 cases in and outside of the capital area would bring the daily caseload to over 3,000 in coming weeks.

In the southeastern city of Daegu, 128 new cases were confirmed on the day, the highest daily tally since 131 infections were reported on March 11 last year.

The number of infections traced to a bar in Daegu's Dalseong County allegedly frequented by Vietnamese nationals and a karaoke room in Seo Ward rose by 55 to 77. Nearly 30 visitors to a sauna in Seo Ward have tested positive for the coronavirus.

Gyeonggi Province, which surrounds Seoul, set a daily record of 708 COVID-19 cases, due to the outbreaks of numerous cluster infections.

The central city of Daejeon reported 71 confirmed cases on Friday, while the central province of South Chungcheong confirmed 75 new daily cases, up sharply from 40 to 50 cases a day in the middle of last month. 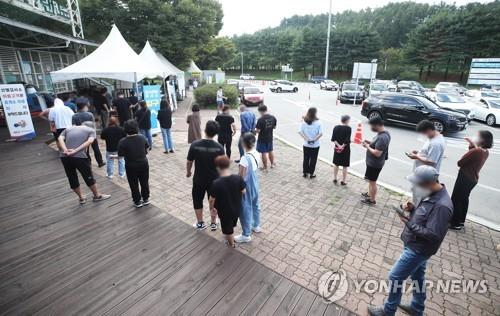 The southwestern province of North Jeolla said it had detected 198 cases, most of which cannot be traced, from Sunday to Thursday.

A 42-year-old woman in Jeonju, North Jeolla Province, said she feels restless as the number of confirmed cases has skyrocketed in the city and her two children attend in-person classes at an elementary school.

"Under the current situation, the only answer seems to be to minimize encounters with people and wear a mask," she said.

Provincial government officials also urged residents to get vaccinated and tested as quickly as possible to cope with fears about the post-Chuseok spread of COVID-19.