WASHINGTON, Sept. 24 (Yonhap) -- A spokesman for the U.S. State Department on Friday reiterated the U.S. holds no hostile intent toward North Korea, while urging the North to come to the dialogue table.

Ned Price made the remark after a North Korean vice foreign minister dismissed a proposal from South Korean President Moon Jae-in to declare a formal end to the Korean War, arguing that what he called U.S. hostility against his country was the main destabilizing factor on the Korean Peninsula.

"We've said this a number of times now, but we have no hostile intent towards the DPRK, and we are prepared to meet with the DPRK without preconditions," the State Department spokesman said when asked if the U.S. believed a declaration of the war's end could be made as a starting point as proposed by Moon, or if it should wait until the North fully denuclearizes.

"We hope the DPRK will respond positively to our outreach," added Price in a virtual press briefing held on the sidelines of the U.N. General Assembly in New York. 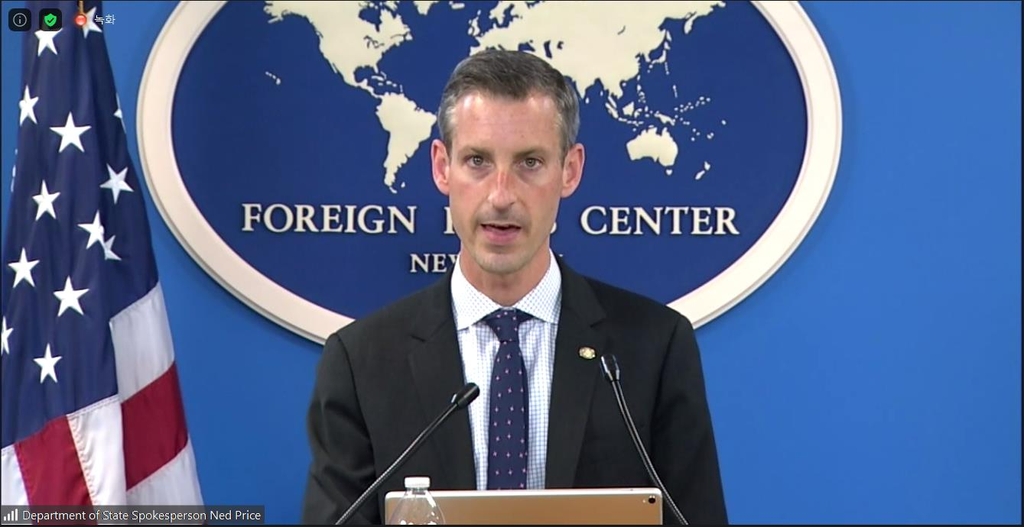 The North Korean vice foreign minister, Ri Thae-song, on Friday (Seoul time), said a declaration of the war's end would become a "mere scrap of paper" unless the U.S. withdrew its hostile policy toward the North.

"The U.S. withdrawal of its double-standards and hostile policy is top priority in stabilizing the situation of the Korean Peninsula and ensuring peace on it," Ri said in a statement carried by the North's official Korean Central News Agency.

Kim Yo-jong, North Korean leader Kim Jong-un's sister, later welcomed Moon's proposal as an "admirable idea" in a separate statement, but she too insisted now may not be the time to discuss the issue while accusing Seoul of being hostile toward Pyongyang.

"We remain committed to achieving lasting peace on the Korean peninsula, and we believe the best way to do that is through dialogue and diplomacy with the DPRK," said Price.

"We will continue to seek engagement with the DPRK as part of a calibrated practical approach, in order to make tangible progress that increases security not only for the United States, but also for our allies in the region, our deployed forces and our partners as well," he added.

North Korea has stayed away from denuclearization talks with the U.S. since early 2019.

It also remains unresponsive to a series of outreaches made by the Joe Biden administration since taking office in January.

Price highlighted joint efforts by his country, South Korea and Japan to denuclearize the Korean Peninsula, pointing to a three-way meeting between the countries' top diplomats in New York this week.

"One of the primary topics of discussion in that trilateral engagement was a common approach towards the DPRK, knowing that if we are to be effective, we need to continue to be and to work in lockstep with our partners in the ROK and in Japan," said Price, referring to South Korea by its official name, the Republic of Korea.

"When it comes to relations between the ROK and the DPRK, we continue to believe that inter-Korean dialogue and engagement is a good thing, and we continue to work closely with our ROK allies on the broader agenda."