The ex-party chairman garnered 47.1 percent of the 71,835 votes cast by registered party members in the Gwangju-South Jeolla Province region, defeating Gyeonggi Gov. Lee Jae-myung by a razor-thin margin of 0.2 percentage point, according to the election results released in a primary event at Kim Dae-jung Convention Center in Gwangju.

The ex-prime minister's victory in the Gwangju-South Jeolla Province region, a key electoral stronghold of the liberal party, snapped the winning streak of the Gyeonggi governor, who won all the four previous regional primary votes by a landslide margin. 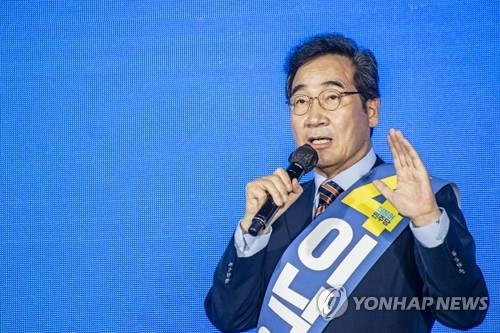 The surprise victory of the ex-DP leader came as the Gyeonggi governor is combating potential corruption allegations over a lucrative land development project in the city of Seongnam, launched in 2015 while he was the city's major.

A handful of companies, including Hwacheon Daeyu Asset Management, with a combined capital of 350 million won (US$297,113), reaped substantial gains of more than 400 billion won in dividends from the city-led project. The governor has been under growing scrutiny over accusations he gave business favors to the companies to join the development project.

The latest election result, however, did little to dislodge the governor's absolute lead in the ongoing DP primary. The accumulated rate of votes for him from the first five of a total of 11 regional primary votes so far came to 52.9 percent, as opposed to the ex-DP chairman's 34.2 percent.

The former chairman is pinning hope on the remaining course of the primary, particularly the regional vote in North Jeolla Province on Sunday, to reverse the race in his favor. The DP is required to hold an additional run-off vote, pitting the front-runner against the runner-up to pick its single candidate for the March 9 election if none of the five candidates wins a majority vote in the ongoing 11-leg competition that will wrap up in Seoul on Oct. 10.

Following the event, Lee Nak-yon told reporters: "I found a bigger ray of hope (today). Based on today's result, I will work toward a better outcome."