SEOUL, Sept. 26 (Yonhap) -- Five groups of media workers urged political parties Sunday to renounce a possible parliamentary vote this week on a bill accused of hurting press freedom, stressing the need to form a consultative body to build social consensus on the issue.

The groups, including the Journalists Association of Korea, issued a joint statement, as the ruling Democratic Party hopes for the bill to be passed Monday, following talks with the main opposition People Power Party.

The legislation, titled the Press Arbitration Act, calls for punitive damages of up to five times more than usual if a media outlet is found guilty of running false or manipulated news reports. Critics warn the bill could be used to silence critical media.

"If political circles answer the proposal to explore prudent, reasonable alternatives through a social consensus organization, journalists currently in the profession will actively join the efforts to improve law and institutions for restoring trust in the press and for strengthening support for victims," their statement read.

The groups said that a consensus can hardly come from the "eight-person" consultative body -- consisting of lawmakers and journalism experts -- launched earlier this month to review the bill.

They also noted the potential negative aspects of the eight-person body, saying the ruling party would see it as a rationale for ramming the bill through parliament later, with the opposition party possibly using it to back its offensive against the ruling rival ahead of next year's presidential election.

Later in the day, members of the eight-person body held its 11th and last session, but failed to narrow differences on key sticking points, including one about punitive damages.

The members decided to make a set of recommendations to the rival parties' floor leaders, particularly about swift and practical measures to protect victims of false reporting, including corrections and rebuttals. 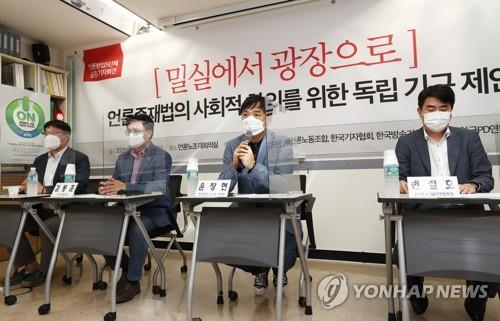