Lee secured the lion's share of 54.5 percent of the 40,838 ballots cast by registered DP members in the regional primary vote in North Jeolla Province, the sixth stop in the party's 11-leg primary competition, according to the voting results released in a primary event held in the gymnasium of Woosuk University in Wanju. 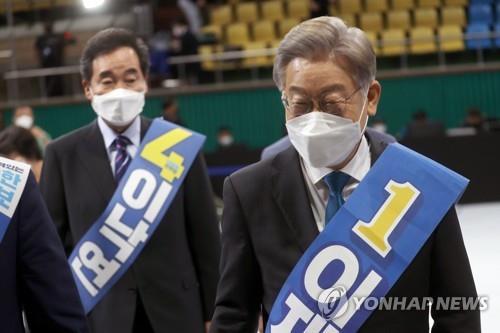 Sunday's victory is expected to provide a crucial stepping stone for the Gyeonggi governor seeking to win an early, clear primary victory. According to the party's primary rules, the primary front-runner is required to face the runner-up in an additional run-off vote if he or she does not secure a majority vote in the primary race.

The governor secured sweeping victories in the first four regional primary votes, including in North Gyeongsang Province and Gangwon Province, but suffered his first defeat to the ex-party leader Saturday in the Gwangju-South Jeolla Province region, which, together with North Jeolla, forms Honam, the core support base for the liberal party.

The governor's latest victory also came as he is combating possible corruption allegations he gave special favors to certain companies to join a lucrative land development project in the city of Seongnam, launched in 2015 while he was the city's major.

The accumulated rate of votes from the six regional votes and one of the three electoral college polls for the Gyeonggi governor so far stands at 53 percent, as opposed to the ex-DP leader's 34.4 percent.

Following the release of the latest vote results, Rep. Kim announced he will drop out of the primary race and threw his support behind the Gyeonggi governor's campaign.

"There are still a mountain of reform tasks to be done and the right person to complete the mission is candidate Lee Jae-myung," Kim said, urging support for his presidential bid. 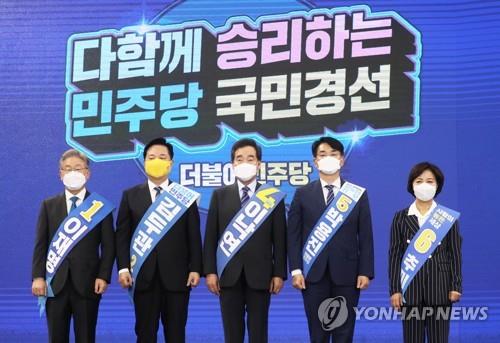