SEOUL, Sept. 27 (Yonhap) -- Controversy surrounding a highly lucrative land development project authorized in the past by Gyeonggi Gov. Lee Jae-myung, the front-running presidential contender for the ruling party, has traveled across party borders amid a public outcry over a colossal severance payment handed to an opposition lawmaker's son, a former employee of the company at the center of the scandal.

Lee of the ruling Democratic Party (DP) in recent weeks has come under growing scrutiny over accusations he gave business favors to Hwacheon Daeyu Asset Management to help it join the development project in the Daejang district in Seongnam in 2015, when he was the city's mayor.

The allegations pointed to a possible personal connection between the governor and the project, from which Hwacheon Daeyu, with a combined capital of 350 million won (US$297,063), reaped colossal gains of more than 400 billion won in dividends.

Since the scandal first broke earlier this month, the main opposition People Power Party (PPP) has gone on a political offensive against Lee, alleging that he abused his power as the then mayor to give business favors to Hwacheon Daeyu. The governor has flatly denied all allegations.

The controversy, however, has taken a new turn after it was revealed Sunday that PPP Rep. Kwak Sang-do's son received a massive severance pay of 5 billion won in January after some seven years of work as a mid-level employee at the company.

The amount of money handed to the 32-year-old son, based on his claimed monthly salary of 2.5 million won, was more than 200 times his legally entitled retirement payment. The revelation immediately prompted widespread outcry, placing Kwak, an outspoken critic of President Moon Jae-in and the ruling party, and the PPP now on the defensive. 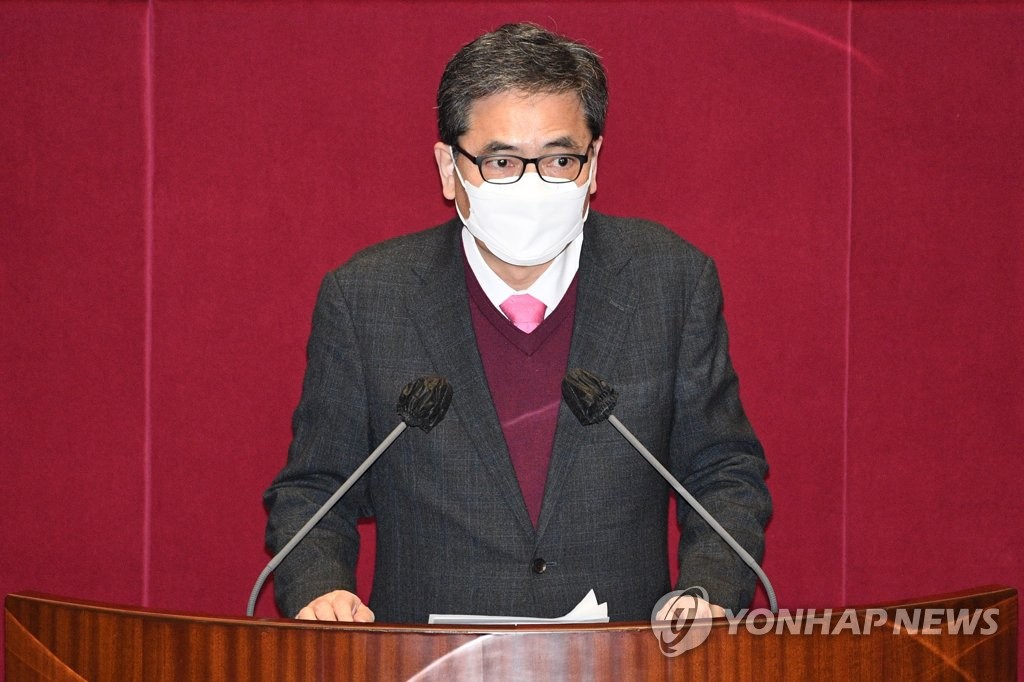 Due to the unconventionally high amount of severance money, speculation has been raised within legal circles that Kwak could have invested in Hwacheon Daeyu through a borrowed name, and that the son's retirement money was in essence the lawmaker's dividend. Kwak and his son denied such speculation.

The lawmaker nonetheless offered to leave the PPP and his membership was removed amid concerns that the severance pay issue could become a political liability as the party is quickening preparations for the March 9 presidential election.

"Whether Kwak has any legal responsibility to take or not will be revealed during an investigation process later, but regardless of that, the PPP feels a heavy sense of responsibility regarding political accountability as a public figure," the party's floor leader Rep. Kim Gi-hyeon said Sunday after an emergency leadership meeting.

Despite Kwak leaving the PPP, Kim continued to apply pressure against Lee, insisting the governor was a key player in the scandal and calling for a special counsel investigation and a special parliamentary inquiry. Kim also claimed that another Hwacheon Daeyu employee besides Kwak's son too received a similar amount of severance payments. 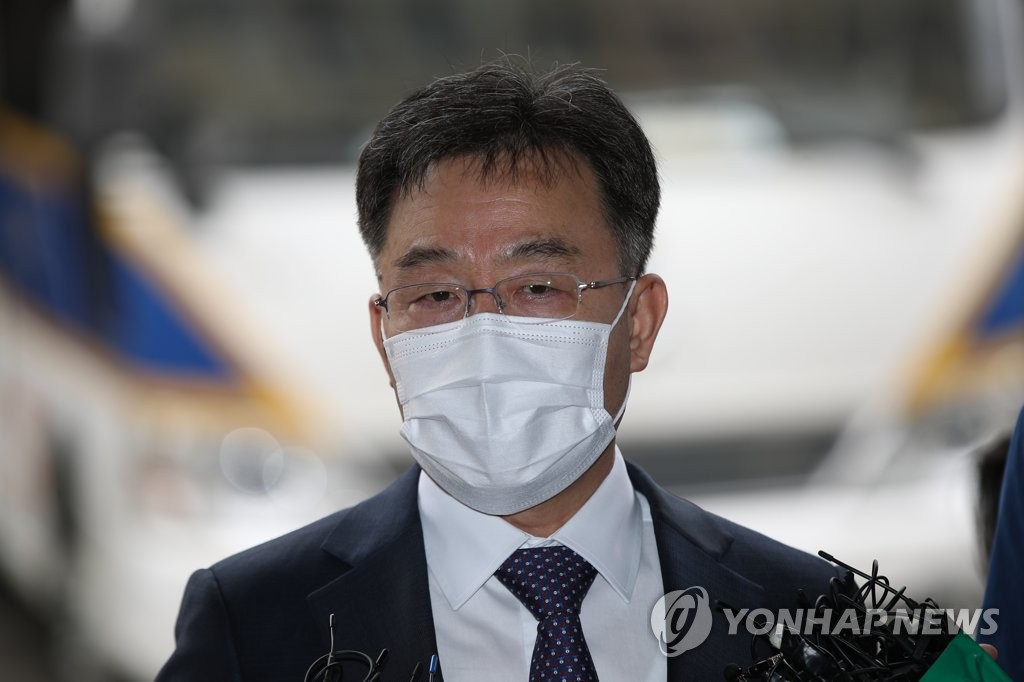 Kim Man-bae, the biggest shareholder of Hwacheon Daeyu, suggested that the amount of the son's severance pay was decided to compensate for the "industrial accident" he experienced while working for the company.

"He suffered from an industrial accident. It's difficult to explain (what happened) due to his privacy," Kim said while appearing for questioning at a police station in Seoul.

The PPP is continuing with its offensive against the governor, with its internal fact-finding committee staging a protest in front of the Seongnam City Hall on Monday.

Lee on Sunday wrote on Facebook that he suspected the son's retirement money was part of bribes handed to Kwak for "the Park Geun-hye government and the PPP disrupting Seongnam city's public development project." Kwak served as Cheong Wa Dae's senior secretary for civil affairs during the previous Park administration. 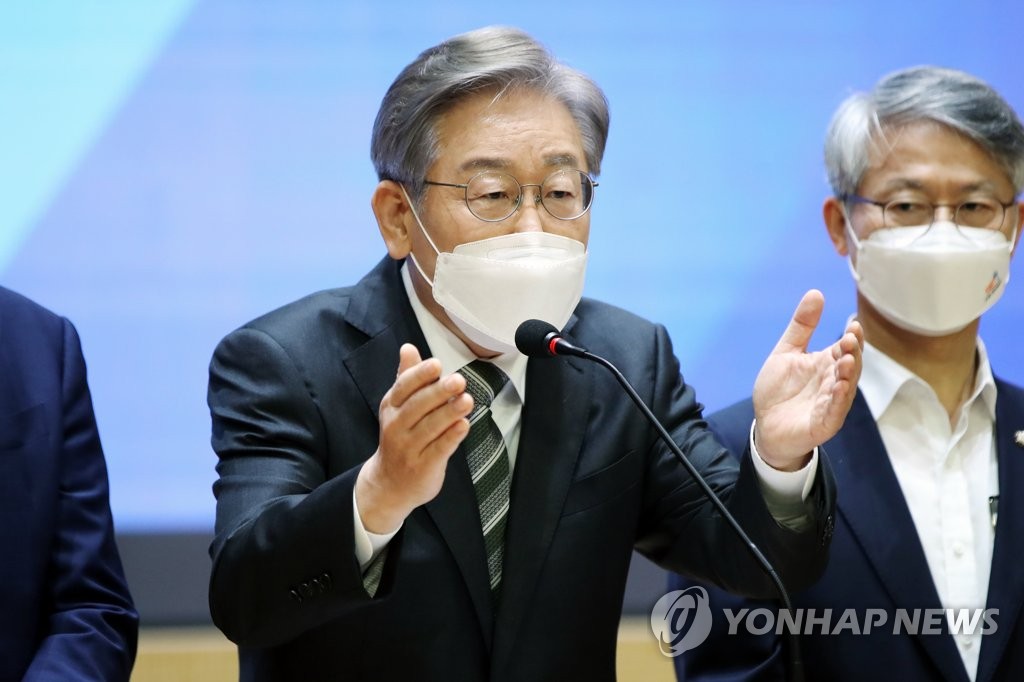 The governor also criticized Kwak's PPP departure as being "cowardly," adding that "a lizard is still a lizard even if its tail is cut off." He also insisted that the entire development case should be handled by either the prosecution service or the Corruption Investigation Office for High-ranking Officials, as opposed to a parliamentary probe or a special counsel investigation.

Separately, Lee's campaign team also filed a complaint with the prosecution Sunday, claiming that Kwak spread false information alleging that the governor was the designer of Hwacheon Daeyu's profit-sharing scheme and was the de facto owner of the company. In response, Kwak on Monday warned that he will take counter legal action against the campaign team's complaint.

Lee Nak-yon, former DP chief and Gov. Lee's main rival in the party's presidential primary race, meanwhile, said in a radio interview that unknown details of the development project in question were slowly coming into the picture, while stressing the need to prioritize fact-finding activities for now.

"When likening (the controversy) to an elephant, we are in a situation in which the legs and ears are being revealed," Lee said, adding that he expects the entirety of the controversy to be disclosed in the future. Later in the day, the former DP chief called for the launch of a government-led special probe team on the city development project scandal.