SEOUL, Sept. 27 (Yonhap) -- South Korean tattooists once again filed a petition with the Constitutional Court Monday against the medical law that requires tattooing to be conducted only by licensed medical personnel.

A total of 153 tattooists associated with the Korea Fashion Tattoo Association and the Korea Tattoo Federation said Article 27 of the medical law that outlaws tattooing by people with no medical license violates their constitutional rights.

"South Korea is the only country that punishes tattooing by non-medical practitioners based on a ruling by the Supreme Court nearly three decades ago," they said in a statement.

"The outdated law does not reflect the reality where getting tattoo by a tattooist has become normal in our society," they said.

Tattooing itself is not illegal in the country, but it should be only conducted by doctors. The 1992 Supreme Court ruling defined tattooing as a medical service.

Following the latest petition, the tattooists began to stage a one-person protest in front of the highest court, saying they will continue protesting until a verdict comes out for a tattooist who stands trial on a violation of the law. 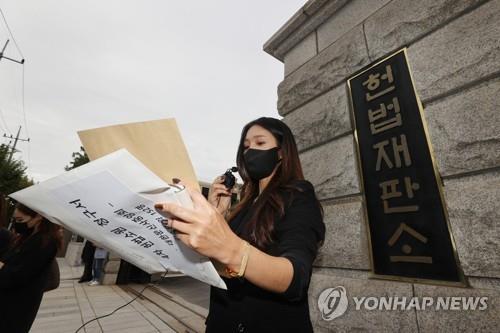