WASHINGTON, Sept. 27 (Yonhap) -- The United States must permanently stop its joint military exercises with South Korea and the deployment of its strategic weapons to the South if it wishes to promote peace on the Korean Peninsula, North Korea's U.N. ambassador said Monday.

Kim Song, the chief of North Korea's mission to the United Nations, also said a good relationship may be formed between the North and the U.S. if and when Washington gives up its hostility toward his country.

"If the U.S. wants to see the Korean War, the most prolonged and long-lasting war in the world, come to an end, and if it is really desirous of peace and reconciliation on the Korean Peninsula, it should take the first step toward giving up its hostile policy against the DPRK by stopping permanently the joint military exercises and the deployment of all kinds of strategic weapons," Kim said in his address to the U.N. General Assembly in New York.

"I am convinced that a good prospect will be opened for the U.S.-DPRK relations and inter-Korean relations if the U.S. refrains from threatening the DPRK and gives up its hostility towards it," he added. DPRK stands for the Democratic People's Republic of Korea, the North's official name. 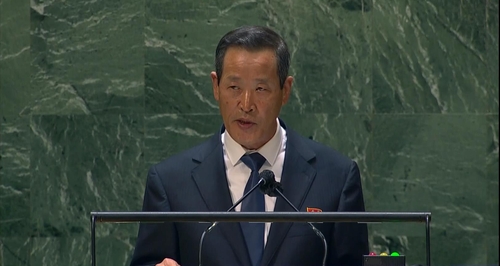 The renewed accusation of U.S. hostility toward the North comes about a week after South Korean President Moon Jae-in proposed adopting a declaration to formally end the Korean War, which ended only with an armistice, technically leaving the two Koreas at war to date.

Pyongyang earlier said the U.S. must first give up its hostility toward the North before the countries can consider declaring the war's end.

Washington has denied having any hostile intent against the North.

"The U.S. hostile policy against the DPRK finds its clearest expression in it's military threats against us," he said. "Not a single foreign troop, not a single foreign military base exists in the territory of the DPRK. But in South Korea, almost 30,000 U.S. troops are stationed at numerous military bases, maintaining a war posture to take military action against the DPRK at any moment."

"The U.S. hostile policy towards the DPRK is not at all abstract. It is, in itself, military threats and hostile acts we are facing from the U.S. every day," added the North Korean diplomat.

He argued former U.S. administrations have claimed both verbally and in written documents to have no hostile intent against the North but their claims have only turned out to be "flowery words to cover up the hostile policy."

"The U.S. has now two options. One is to contribute to the peace and stability of the Korean Peninsula and the world by withdrawing an anachronistic or hostile policy towards the DPRK in a bold and complete manner," said Kim.

"If the U.S. shows its bold decision to give up its hostile policy, we are also prepared to respond willingly at any time," he added.

The North Korean diplomat also argued the U.S. did not become hostile against the North because of its nuclear weapons but that the North developed nuclear capabilities because of U.S. hostility.

"When it comes to the nuclear issue, it is not the DPRK's position of nukes that the U.S. became hostile towards us. On the contrary, we have traversed an inevitable course of history as the U.S., the biggest nuclear power in the world, has been posing nuclear threats antagonizing the DPRK for more than 70 years."

Inquiries to the U.S. State Department and the National Security Council seeking U.S. reactions to the North Korean diplomat's remarks were not immediately answered.

"We are prepared to meet with the DPRK without preconditions, and of course, we certainly hope that the DPRK will respond positively to our outreach," principal deputy spokesperson Jalina Porter said in a press briefing.