SEOUL, Sept. 28 (Yonhap) -- Rival parties on Tuesday decided to delay a parliamentary vote on a controversial media bill under criticism for potentially undermining press freedom as they could not reach a compromise plan in recent meetings.

The parties will delay the vote for one more day to Wednesday and continue negotiations for a bipartisan compromise on the disputed revision bill, the floor leaders of the ruling Democratic Party (DP) and the main opposition People Power Party (PPP) said after a meeting chaired by National Assembly Speaker Park Byeong-seug.

"The parties have yet to come to a unified alternative bill to the initial proposal," Yun told reporters, adding the DP will strive to reach a bipartisan deal by Wednesday.

The DP-proposed amendment to the media arbitration act is centered on strengthening punitive damages against fake news. It has been under bipartisan negotiations for nearly a month after the DP stepped back from its initial plan to advance it through a plenary parliamentary meeting in late August facing strong backlash from opposition parties and media industry groups.

With a number of contentious issues remaining unresolved by the Monday deadline set last month by the rival parties to put the bill to a full-floor vote, however, the parties had earlier decided to reschedule the plenary voting session to Tuesday afternoon.

According to officials of the two parties, they have come so far as to narrow their differences on the most contentious issue of enforcing punitive damages up to five times the normal amount on media outlets found guilty of disinformation.

The parties were reportedly considering removing the term dictating the fivefold increase in favor of alternative measures enforcing aggravated penalties against fake news.

The bipartisan talks, however, hit a sticking point over the right of fake news victims to demand the removal of relevant media reports, granted in the bill, with the PPP insisting the complete elimination of the term, party officials said.

The issue of whether to give the right to demand corrections of media outlets has also remained a point of fierce bipartisan contention, they added.

Controlling 169 seats of the unicameral 300-member parliament, the DP technically has the power to push the bill through a plenary session on its own.

The party, however, apparently fights shy of such a unilateral action out of fears it could stir up fierce opposition and public backlash. 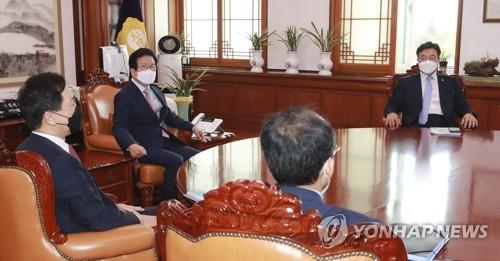