SEOUL, Sept. 28 (Yonhap) -- Three service members and a civilian worker for the Army tested positive for the new coronavirus, the defense ministry said Tuesday, the latest in a series of infections at barracks.

One officer affiliated with the South Korea-United States Combined Forces Command in Seoul tested positive while in isolation after one of his family members was confirmed to have been infected, according to the ministry.

Two Army officers, stationed in Seoul and the city of Goyang, respectively, also tested positive following the infections of their family members, and the civilian worker in Seoul contracted the virus after coming into contact with a colleague who tested positive earlier, it added.

The latest cases brought the total caseload reported among the military population to 1,743, with 57 of them under treatment, the ministry said.

Nationwide, the country reported 2,289 new COVID-19 cases Tuesday, which is the highest ever figure for a Monday, according to the Korea Disease Control and Prevention Agency (KDCA). The daily tally is counted until midnight and announced the following morning. 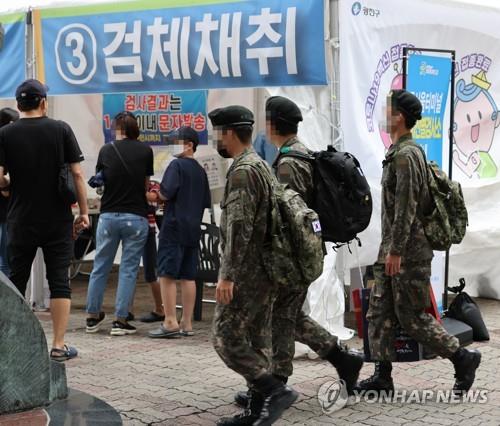