The government earlier envisioned the "With Corona" scheme, under which COVID-19 is treated as an infectious respiratory disease like the seasonal influenza, with eased distancing being implemented. 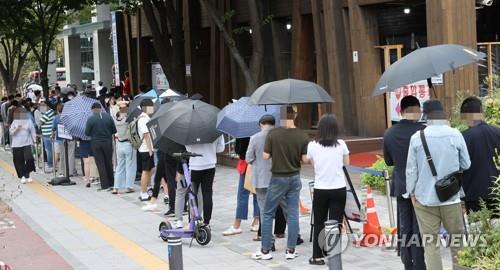 "The transition is likely to be around late October when 80 percent of adults are fully vaccinated," Health Minister Kwon Deok-cheol said during a press conference, adding it could possibly be in early November, considering it takes two weeks to build immunity following vaccination.

The envisioned plan comes as other countries have also adopted a similar strategy, including Singapore's "New Normal" as it has become a reality that COVID-19 will never go away, and it will be difficult to bring infections down to zero.

Under the envisioned system, there is no massive quarantine and infection tracing. Patients also will most likely stay and recover at home since symptoms are mostly mild.

Kwon, however, cited the importance of maintaining basic quarantine measures as it would be impossible for medical facilities to handle new daily cases of between 4,000 and 10,000.

The envisioned plan also does not mean lifting all relevant public health restrictions, especially the mandatory wearing of face masks.

On Tuesday, the country reported 2,289 new COVID-19 cases, remaining in the 2,000s for the third consecutive day, as infections spiked outside the greater Seoul area in the aftermath of the mass migration during the Chuseok holiday. The total caseload increased to 305,842.