SEOUL, Sept. 28 (Yonhap) -- South Korea will establish a regional branch of its legislature in the central administrative city of Sejong, as lawmakers approved a bill providing a legal guarantee for the long-envisioned plan Tuesday.

Lawmakers passed a proposed revision to the National Assembly Act on the establishment of the parliamentary branch in Sejong in a plenary parliamentary session with majority consent.

The legislation aims to decentralize the densely populated greater Seoul area and help heighten efficiency in the parliament's collaboration with government ministries and agencies located in the central administrative city, some 160 kilometers south of Seoul.

The passage, coming nearly five years after the first relevant bill was proposed, will facilitate and provide a fresh momentum to the project to open the branch by 2027.

In an attached comment, the bill called on the National Assembly's secretariat to speedily establish a relevant basic action plan, based on the 2021 national budget earmarked for the envisioned relocation project.

Following up on the passage, the parliamentary secretariat will begin the process to adopt the construction design of the envisioned Sejong assembly later this year.

According to a proposal by the National Assembly Secretariat in 2019, the parliament's budget and accounts committee, as well as 11 other standing committees that oversee government ministries based in Sejong, were highly likely to relocate to the same city in the relocation project.

The several of the assembly's major departments, including the secretariat, were also under review for relocation, which, if carried out as proposed, will move about two-thirds of the chamber's total functions to Sejong.

A 616,000-square-meter section of land near the government office complex in Sejong has previously been selected as a site to host the Sejong assembly.

National Assembly Speaker Park Byeong-seug welcomed the bill's passage, saying the envisioned relocation would contribute to defusing development gaps between the capital region and the rest of the country.

"(The National Assembly) took its first step for the era of the National Assembly in Sejong, exactly 20 years after (the country) started discussion in earnest of the (creation of the Sejong) administrative capital in 2002," Park said after the bill's passage.

"(Establishing) the Sejong assembly branch is at the core of (the vision for) balanced national development and will serves as an opportunity to heighten national competitiveness." 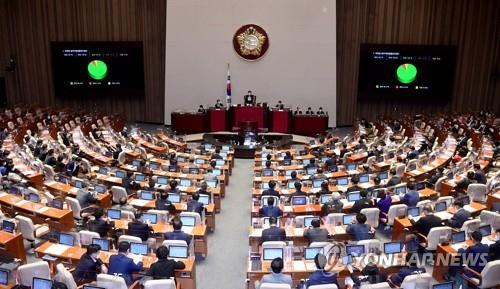