Moon said Monday that his government may have to carefully consider prohibiting dog meat consumption amid debate over the controversial practice and growing awareness of animal rights.

The Korea Association for Animal Protection and 44 other domestic civic groups held a joint press conference in Seoul to express support for Moon's remarks and wish for immediate tangible results. 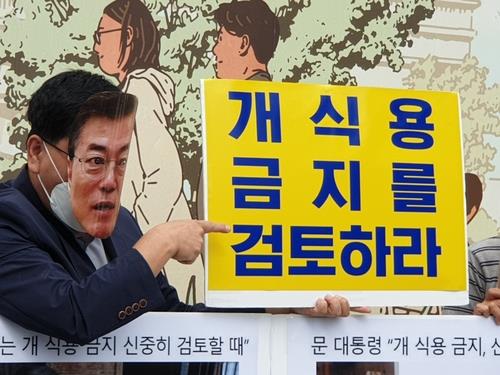 "The long awaited ban on eating dog meat can no longer be delayed despite objections from a small number of dog farm owners," the civic groups said, calling on the government and parliament to come up with practical measures as soon as possible.

Moon made his latest suggestion while being briefed by Prime Minister Kim Boo-kyum on the government's plan to improve the system to take care of abandoned pets.

In South Korea, animal rights activists and dog farm owners have fiercely clashed over legislation against slaughtering dogs for meat consumption. A lawmaker of the ruling Democratic Party has recently introduced a bill that would effectively ban killing dogs for meat.