SEOUL, Sept. 29 (Yonhap) -- North Korea said Wednesday it conducted the first test-launch of a newly developed hypersonic missile a day earlier that has "strategic significance" in bolstering its self-defense capabilities.

The North's Academy of Defence Science test-fired the Hwasong-8 missile from Toyang-ri, Ryongrim County of Jagang Province, and "ascertained the stability of the engine as well as of missile fuel ampoule that has been introduced for the first time," the official Korean Central News Agency (KCNA) said.

The fuel "ampoule" appears to be referring to a container of liquid fuel, which would reduce the preparation time for a missile launch and make the weapon ready for use almost as fast as a solid-fuel missile, compared with conventional missiles that need fuel injection before firing.

"The development of this weapon system... is of great strategic significance in markedly boosting the independent power of ultra-modern defense science and technology of the country and in increasing the nation's capabilities for self-defense in every way," the KCNA said. 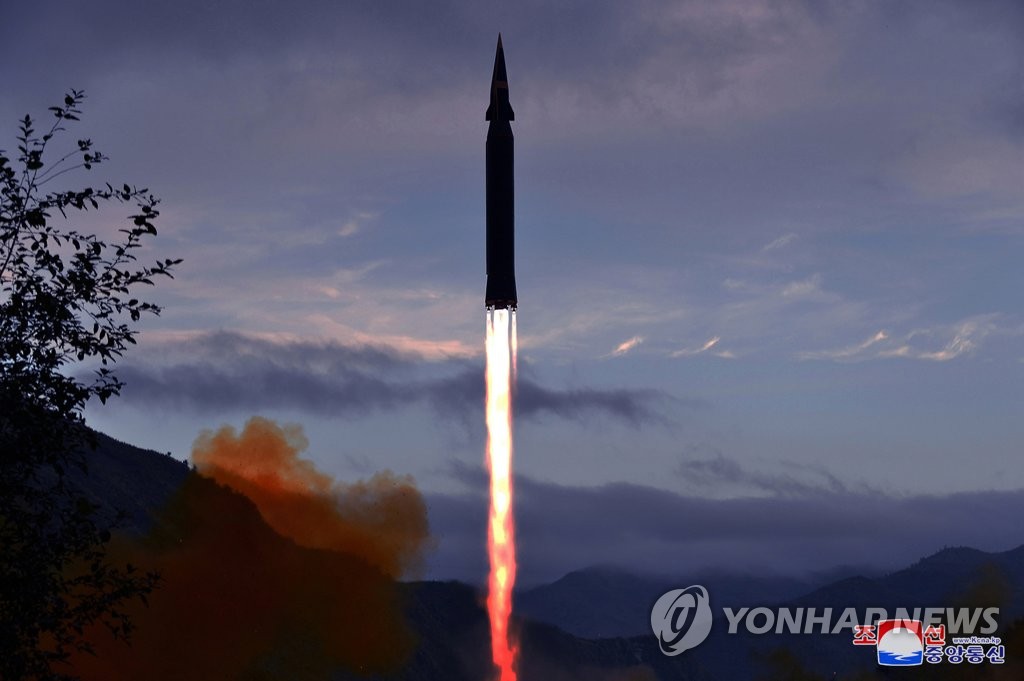 Other details, such as the distance and speed of the tested missile, were not disclosed.

Pak "noted the military significance of turning all missile fuel systems into ampoules," the KCNA said.

This marked the North's sixth known major weapons test so far this year and also came about two weeks after the North launched two short-range missiles into the East Sea. Leader Kim did not attend any of the test-firings.

The test of the new weapon came amid cautious optimism created by back-to-back statements issued by the leader's sister, Kim Yo-jong, late last week, in which she said Pyongyang could declare an end to the Korean War as suggested by the South and even discuss the possibility of a summit.

Kim, however, noted they can take place only when South Korea drops its double standards of denouncing the North's "self-defense" weapons tests as "provocations" while beautifying its own arms buildup.

On Tuesday, South Korea's military said that the North fired what appears to be a short-range missile eastward early in the day. The Japanese government said it appears to be a ballistic missile.

Hours later, the Seoul government convened an emergency security meeting of the National Security Council and voiced regret over the launch.

President Moon Jae-in ordered a "comprehensive analysis" of the missile launch and recent statements from the North.

The ties chilled further after North Korea blew up the Kaesong liaison office and cut off all cross-border communication lines in protest of anti-Pyongyang leaflets sent from the South.