SEOUL, Sept. 29 (Yonhap) -- North Korea's first hypersonic missile unveiled this week could ultimately prove to be a "game changer," experts warned Wednesday, as such missiles traveling at a speed of at least Mach 5 -- five times the speed of sound -- are hard to intercept with existing missile defense shields.

Though the North's missile is still in its early stage of development and is believed to fall far short of its U.S., Chinese or Russian counterparts, experts said the beginning of such development itself is worrisome enough.

The KCNA did not disclose other details, such as the flight range or speed of the projectile.

Hypersonic missiles usually fly at a speed of at least Mach 5, or 6,125 km per hour, and are capable of striking targets from longer ranges within a shorter period of time, giving little time for enemies to respond.

Shooting down missiles hurtling toward targets at such massive speeds is beyond the capabilities of the existing missile defense systems, and that's why hypersonic missiles are often called a "game changer," experts say.

While it's unclear how far the North has come in the development of the new missile, the KCNA said the test-launch confirmed "the guiding maneuverability and the gliding flight characteristics of the detached hypersonic gliding warhead."

A hypersonic glide vehicle is launched aboard a missile before it separates and approaches the target. They can change trajectory during flight, making it harder for enemies to intercept.

Yet, the Joint Chiefs of Staff said the newly unveiled missile would require "considerable time for actual deployment," adding South Korea and the U.S. are capable of intercepting it at the current stage.

The North's missile reportedly flew at a speed of around Mach 3.

"As it was the first test-launch, the missile's flight range, altitude, speed and other features would be incomplete, but the North Koreans would have accomplished their intended goal if they were able to obtain data necessary to move on to the next stage in the development process," professor Kim Dong-yup of Kyungnam University's Far East Institute said. 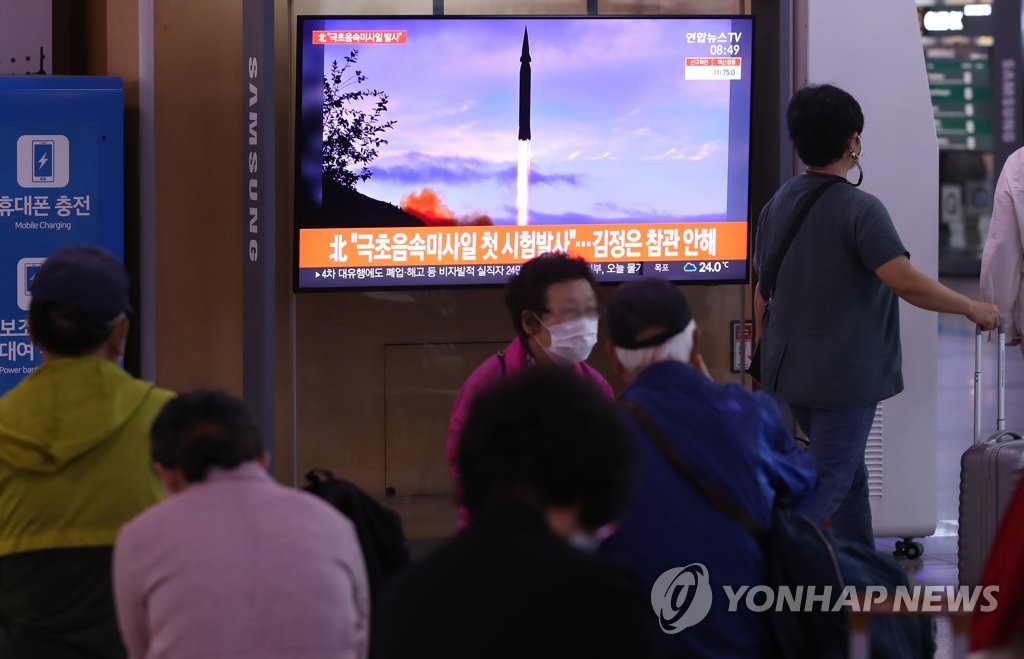 Also drawing attention is the use of a missile fuel ampoule, which appears to be referring to a container of liquid fuel to reduce the preparation time for a missile launch, almost as fast as a solid-fuel missile.

During the latest weapon test, the stability of "the engine as well as of missile fuel ampoule that has been introduced for the first time" was "ascertained," KCNA said.

Compared with conventional missiles that require hours of liquid fuel injection before firing, the ampoule would allow the fuel to be stored for months before immediate use, according to experts.

"In terms of military threats, the fuel ampoule technology is assessed as a bigger threat than the detachable hypersonic gliding warhead," missile expert Ryu Sung-yeop from the Korea Research Institute of Military Affairs said, warning such technology would allow the North to fire its traditional missiles at any time.

Tuesday's missile launch came less than 10 months after North Korean leader Kim Jong-un unveiled the task to develop a "hypersonic gliding flight warhead in a short period" during a party congress in January.

Officials said the North is expected to conduct additional test-launches to stabilize the missile's capabilities and extend its flight range.

"It looks like a medium- to long-range missile similar to Hwasong-12 in design," Shin Jong-woo, a senior analyst at the Korea Defense Security Forum in Seoul, said.

The latest missile is known to have flown less than 200 kilometers, though the South Korean military has yet to confirm.

The KCNA did not mention whether it was ballistic, but experts said it is likely to be a ballistic missile given its name, Hwasong, which has been used for the country's other ballistic missiles using liquid fuel.