INCHEON, Sept. 29 (Yonhap) -- Declaring an end to the Korean War could be a "very useful" and "meaningful" step that builds mutual trust between the two Koreas, and would pave the way for peace and cooperation on the Korean Peninsula, Unification Minister Lee In-young said Wednesday.

During a press meeting held just before embarking on an overseas trip to Germany, Belgium and Sweden, Lee urged North Korea to come out for dialogue to discuss denuclearization, inter-Korean relations and other cross-border issues.

The remarks came days after North Korea expressed a willingness to discuss an end to the 1950-53 Korean War as proposed by the South and even the possibility of a summit between their leaders on the conditions that Seoul drops its double standards on its weapons tests and hostility against its regime.

"Our government's stance has been made clear continuously that declaring an end to the war is the entrance to peace and could be a very meaningful step that serves as a catalyst for denuclearization," Lee told reporters at Incheon International Airport, west of Seoul.

"Making the end-of-war declaration could be a very useful and meaningful step that would help South and North Korea, North Korea and the U.S., and even other relevant countries to lay down their intentions for war and hostility to each other, form mutual trust, and encourage them to move toward peace and cooperation," he added.

Lee said that an end-of-war declaration could make such progress possible without causing any immediate economic, military and political burdens, nor would it affect South Korea's alliance with the U.S. given that it is something that carries a lot of symbolic meaning.

Lee called for North Korea to come out for talks at the earliest date possible to discuss the restoration of inter-Korean relations, peace and even denuclearization.

"To find solutions to such issues in need of simultaneous and step-by-step corresponding measures, we have to come out for dialogue first and foremost," he said.

The minister said that the two Koreas could advance their dialogue in the process of restoring cross-border communication lines that have been severed since last June.

Inter-Korean relations remain in a deadlock since the no-deal summit between the U.S. and North Korea in early 2019. North Korea blew up a liaison office in its border town of Kaesong and cut off all cross-border communication lines in protest of anti-Pyongyang leaflets sent from the South.

During his visits to the European countries, Lee said that he will try to draw cooperation with regard to such issues as an end-of-war declaration, advancement of peace on the Korean Peninsula and inter-Korean relations. 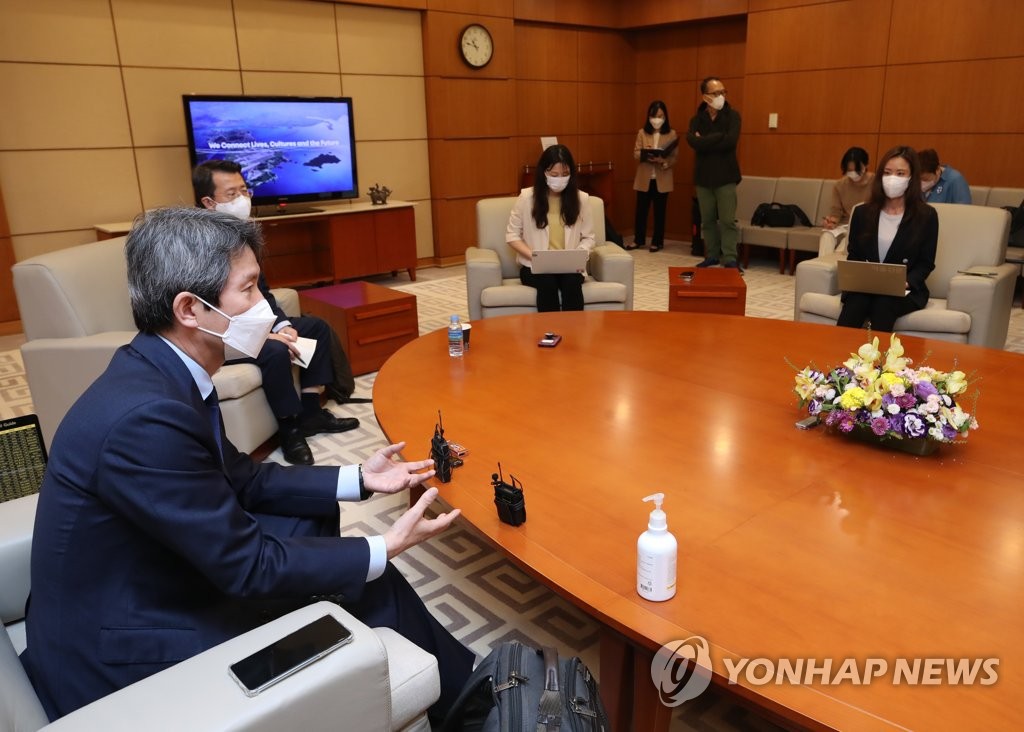