JAKARTA/SEOUL, Sept. 30 (Yonhap) -- The U.S. special representative for North Korea, Sung Kim, reiterated Thursday that Washington has no hostile intent toward Pyongyang and supports humanitarian aid to the country.

Kim made the remarks after he held talks with his South Korean counterpart, Noh Kyu-duk, in Jakarta, to discuss humanitarian support, confidence-building measures and other steps to encourage Pyongyang's return to dialogue.

The talks came after North Korean leader Kim Jong-un told a parliamentary session Wednesday that the U.S. remains "utterly unchanged" in pursuing hostile policy toward his country, while stressing its offer for dialogue is no more than a "petty trick" for hiding hostility.

"We remain open to engagement with the DPRK to discuss the full range of bilateral and regional issues. I want to make clear again that the United States harbors no hostile intent toward the DPRK," the U.S. envoy said. 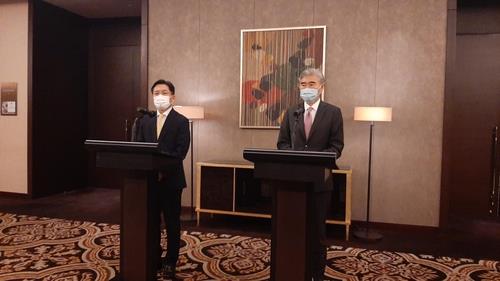 Kim also restated Washington's readiness to cooperate with the North on the humanitarian front.

"We are also prepared to work cooperatively with the DPRK to address areas of shared humanitarian concern," he said. "To this end, the U.S. supports the provision of humanitarian assistance, consistent with international standards for access and monitoring, to the most vulnerable North Koreans."

Touching on the recent spate of the North's missile launches, Kim criticized them for violating multiple U.N. Security Council resolutions and posing a threat to the North's neighbors and the international community.

"I reiterated that the U.S.' commitment to our allies is stronger than ever as we work closely with the Republic of Korea to chart a path forward towards complete denuclearization and a lasting peace regime on the Korean Peninsula," he said.

Before the talks, Noh and Kim held trilateral online talks with their Japanese counterpart, Takehiro Funakoshi, to discuss cooperation in efforts to reengage with the North.

Thursday's talks came amid growing concerns over the North's recent saber-rattling, including Tuesday's test-firing of a newly developed hypersonic missile.

Striking a conciliatory note, the North Korean leader told Wednesday's parliamentary session that he is willing to reactivate the cross-border communication lines in early October

During their talks, Noh and Kim also discussed President Moon Jae-in's recent proposal for the declaration of a formal end to the 1950-53 Korean War, which Noh has said was the "most effective" among confidence-building measures with the North.

"Ambassador Noh briefed me in detail on the ROK government's initiative to declare an end to the Korean War, and we agreed to continue our close communication on the initiative," Kim said. ROK stands for the Republic of Korea, South Korea's official name.

This week's talks followed their last in-person talks in Tokyo a little over a fortnight ago. Noh and Kim also met in Seoul and Washington last month in an indication of stepped-up diplomacy to reengage with the North.