SEOUL, Oct. 1 (Yonhap) -- A snowballing scandal centered on a controversial land development project in Seongnam, just south of Seoul, touched off a war of words between rival parties Friday, leading to a temporary suspension of the National Assembly's annual government audit on the first day of its three-week run.

The National Assembly launched its annual audit of the government and state agencies earlier in the day, the last of such parliamentary inspection under the Moon Jae-in administration. A total of 745 government ministries and agencies are subject to this year's inspection overseen by the assembly's 17 standing committees.

The governor has been accused of having allegedly handed out business favors to Hwacheon Daeyu Asset Management, a key investor in the development project in Seongnam's Daejang district, in the past while serving as the city mayor.

The allegations pointed to a possible personal connection between Lee and the project, from which Hwacheon Daeyu, with a combined capital of 350 million won (US$297,063), reaped colossal gains of more than 400 billion won in dividends.

Rivals from the ruling Democratic Party (DP) fiercely protested the picketing campaign, leading to the suspension of many of the audit sessions less than an hour after their openings. At one point late in the morning, the sessions of all seven committees were suspended amid escalating partisan debates. 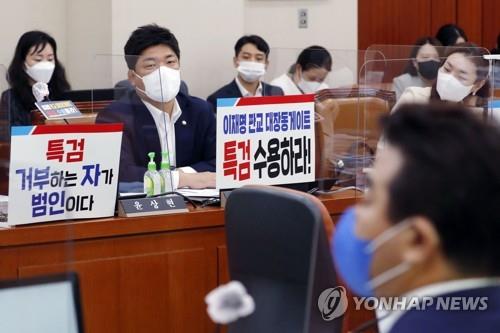 "(The PPP) is trying to turn the audit session into a political battleground by exposing political slogans with no relevance to the Supreme Court," Rep. Park Ju-min of the DP said.

In the course of the three-week inspection, the scandal is predicted to consume almost the entirety of the audit, as the rival parties are competing to shape public opinion in their respective favors in the run-up to the March 9 presidential election.

Also an explosive issue at stake is a separate scandal that alleges former Prosecutor General Yoon Seok-youl, the PPP's presidential primary front-runner, as having tried to meddle in politics by having one of his subordinates prod the main opposition to file criminal complaints against critical ruling bloc figures and journalists while serving as the chief prosecutor.

Another flashpoint topic is the selection of big-name business leaders, including Kim Beom-su, founder of internet giant Kakao Corp., as witnesses at inquiries into alleged abuse of power by online platform operators.

Regional heads of global tech giants, such as Google, Apple and Facebook, are also expected to appear to answer lawmakers' inquiries.

Other relevant issues, such as the country's fight against the COVID-19 pandemic and the DP's push for a controversial media bill, are also expected to make headlines. 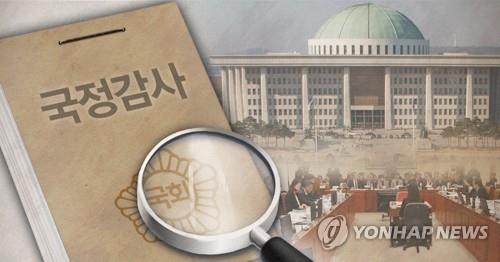