Lee won 56.7 percent of all 6,971 ballots cast by registered party members on the southern island, the seventh stop on the party's 11-leg primary race, the party announced.

A snowballing land development scandal allegedly involving his aides and associates did little to dislodge his strong lead in the primary race.

His rivals claim that Lee possibly gave favors to some developers to secure a highly lucrative apartment construction project in Seongnam, launched in 2015, while he was serving as the city's mayor.

The accumulated rate of votes the governor has mustered from the seven regional primary votes, including Jeju and South and North Jeolla Provinces, and one of the three electoral college votes so far stood at 53.4 percent, as opposed to the ex-DP leader's 34.7 percent.

If he wins a majority of the vote, he will be nominated in the race's final leg in Seoul on Oct. 10. If he fails to secure the threshold, he must undergo a run-off vote.

Two more regional votes will be held over the weekend -- in the Busan-Ulsan-South Gyeongsang Province region on Saturday and Incheon on Sunday. 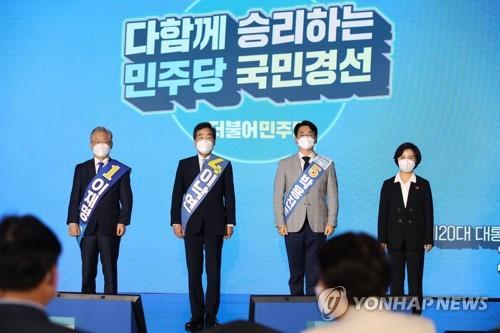