The Seoul Administrative Court allowed Lee Dong-wook, a doctor and a vocal critic of the government's antivirus measures, to hold rallies in Seoul on the condition they involve up to 50 people and be held between 4 p.m. and 6 p.m. from Saturday through Monday.

Lee, who served as the chief of the Gyeonggi Province Medical Association, initially planned to hold two rounds of rallies in central Seoul between 11 a.m. and 6 p.m. during the three-day holiday, along with around 100 and 300 participants, respectively.

The Seoul metropolitan government banned them, citing concerns over virus transmission, and he filed an administrative lawsuit and injunction against the decision with the court.

"The complete ban on outdoor rallies in Seoul, regardless of their time, scale and method, is excessive despite the public necessity to stop the spread of COVID-19," the court said, pointing out that the government allows in-person church services and several other personal events, with more than half of citizens fully vaccinated.

Instead, the court required the organizer to abide by strict social distancing measures, such as temperature checks and listing of participants.

South Korea has experienced the fourth wave of the pandemic since early July, and the situation has worsened in recent days in the aftermath of the fall harvest Chuseok holiday last week.

On Friday, the country reported 2,486 new COVID-19 cases, which marked the sixth straight day that the daily figure has surpassed 2,000.

South Korea will have an extended weekend, as the government designated the coming Monday as a substitute holiday for the Oct. 3 National Foundation Day, which is Sunday. 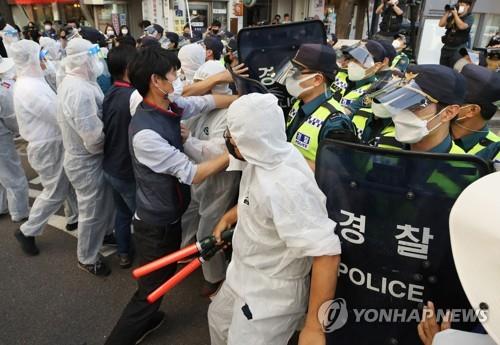