SEOUL, Oct. 2 (Yonhap) -- Seoul Mayor Oh Se-hoon was summoned by prosecutors on Saturday for questioning about allegations that he spread false information during his mayoral by-election campaign in April.

Oh arrived at the Seoul Central District Prosecutors Office around 10 a.m. before being grilled as a suspect about his remarks on a scandal-plagued development project called Pi-City in southern Seoul.

"I'm very sorry to the people for being investigated like this. I'll make statements confidently and wait for the results," Oh told reporters before entering the prosecution office. 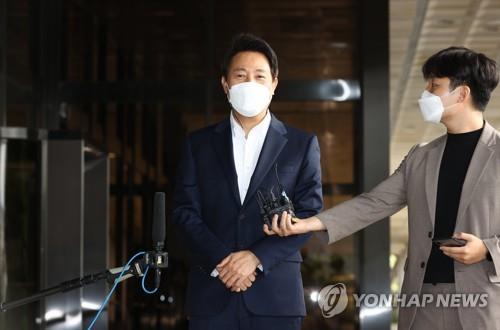 Oh, affiliated with the main opposition People Power Party, won a landslide victory against the ruling Democratic Party's candidate in the April 7 mayoral by-election. Oh had previously served as the mayor of Seoul from 2006 to 2011.

Police had conducted an extensive investigation into the authenticity of Oh's remarks before transferring the case to the prosecution on Sept. 24.