Lee won 55.3 percent of all 35,832 ballots cast by registered party members in the Busan-Ulsan-South Gyeongsang Province region, the eighth round of the party's 11-leg primary race, the party announced.

Lee Nak-yon, formerly a prime minister and leader of the party, finished second with 33.6 percent, followed by ex-Justice Minister Choo Mi-ae with 9.7 percent and Rep. Park Yong-jin with 1.3 percent.

The results showed again that the DP's primaries are little affected by the suspicions that the Gyeonggi governor is involved in a corruption scandal related to a residential area development in Seongnam, south of Seoul, several years ago. Lee was Seongnam mayor at that time. A prosecution probe into the case is currently under way. 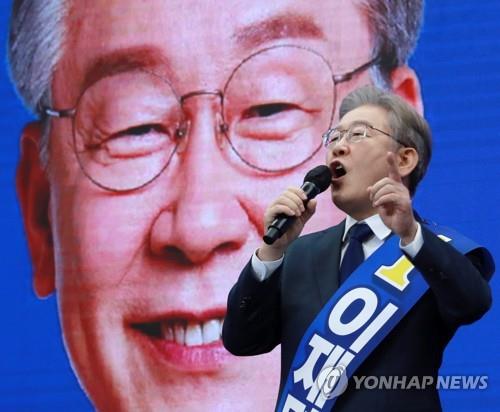 The accumulated rate of votes the governor has garnered from the eight regional primary votes, including the Saturday one, and one of the three electoral college votes, stood at 53.5 percent, with the former DP leader getting 34.6 percent.

If the governor wins a majority of the vote in the ongoing primary, he will be nominated in the race's final leg of Seoul on Oct. 10. If he fails to secure the threshold, he will face a run-off vote against the runner-up.

The result of the ninth regional primary vote in the city of Incheon, west of Seoul, will be released on Sunday, along with that of the second electoral college vote, which together are widely expected to give shape to the final primary outcome.