SEOUL, Oct. 4 (Yonhap) -- South Korea's daily new coronavirus cases fell below the 2,000s on Monday as fewer people took virus tests over the weekend amid fears over the wide spread of the virus.

The country added 1,673 more COVID-19 cases, including 1,653 local infections, raising the total caseload to 319,777, according to the Korea Disease Control and Prevention Agency (KDCA).

The government designated Monday as a substitute holiday for Oct. 3 National Foundation Day. The Oct. 9 Hangeul Day, which marks the proclamation of the Korean alphabet, will be observed as a three-day extended weekend.

The country added six more deaths from COVID-19, raising the death toll to 2,513. 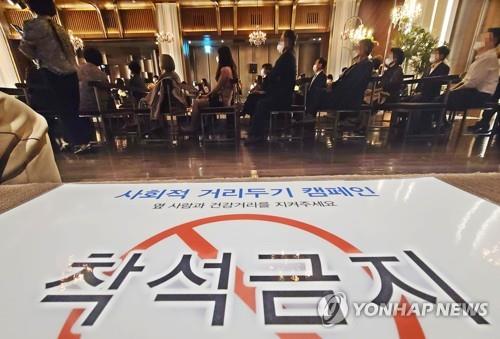 For two weeks from Monday, South Korea extended the toughest social distancing rules in the greater Seoul area, home to half of the population of 52 million.

Since the country began its inoculation campaign on Feb. 26, 39.71 million people, or 77.3 percent of the population, have received their first shots of COVID-19 vaccines, the KDCA said.

The number of fully vaccinated people stood at 27.01 million, or 52.6 percent.

Advance reservation for the vaccination of people aged 16 to 17 will start Tuesday under the country's additional vaccination scheme.

The number of patients with serious symptoms across the country reached 348, up from 346 the previous day, the KDCA said.

The total number of people released from quarantine after making full recoveries was 282,669, up 3,822 from a day earlier.
(END)