SEOUL, Oct. 3 (Yonhap) -- Seoul Mayor Oh Se-hoon returned home early Sunday after 14 hours of questioning by prosecutors over allegations that he spoke falsehood during a TV debate in the run-up to April's mayoral by-election.

Oh was accused of spreading false information after he said during the pre-election debate that a scandal-plagued development project in 2009 had nothing to do with his previous term as Seoul mayor from 2006 to 2011.

Police looked into the allegations and referred the case to the prosecution.

Oh has claimed he forgot about the case because the project ultimately fell through.

He appeared at the Seoul Central District Prosecutors Office for questioning around 10 a.m. Saturday and left the prosecutors' office around 20 minutes past midnight. 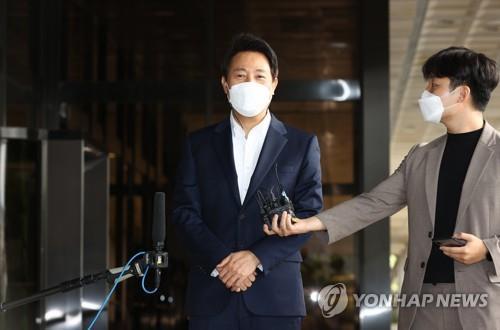