The accident happened at 1:41 a.m. when a Chevrolet Camaro collided with the rear end of the Avante compact ahead on a four-lane road near a beach in Incheon, said Kim Hyun-ki, a police officer handling the case. 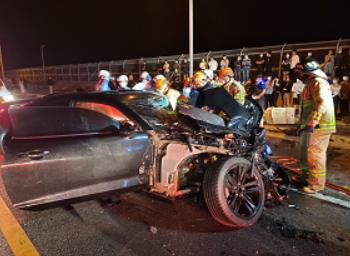 The Chevrolet Camaro crossed the center line after the first impact and collided with a Kia Morning minicar coming from an opposite lane, he said.

The accident killed the Camaro driver, a 22-year-old South Korean, and the 33-year-old Libyan national, who was behind the wheel of the Morning. Five others -- all South Koreans who were riding in the three cars -- were injured.

Police informed the Libyan Embassy in Seoul of the death of the Libyan national, a trader of used cars in Incheon, Kim said.

A friend of the Camaro driver told police they were returning to Yongin, south of Seoul, from a trip to the beach when the tragedy happened. The driver had not been drinking, the friend said.

Kim said an investigation is under way to determine the cause of the accident.