Samsung, Hyundai Motor, SK and LG groups posted a combined net income of 37.6 trillion won (US$31.7 billion) last year, up 2.2 trillion won from a year earlier, according to the data that the Fair Trade Commission presented for an annual parliamentary audition.

The figure took up 83 percent of slightly over 45 trillion won registered by the country's 30 leading conglomerates by assets.

The percentage was up 12 points from the previous year, with the total bottom line of the 30 groups declining by about 4.6 trillion won in 2020 from a year earlier.

But the ratio of the top four's sales to the total increased to 56.7 percent last year from 54.9 percent a year earlier, according to the data.

Market watchers said the figures show the concentration of economic power in the top four conglomerates has deepened over the past five years despite the Moon Jae-in administration's efforts to reform the country's large business groups. 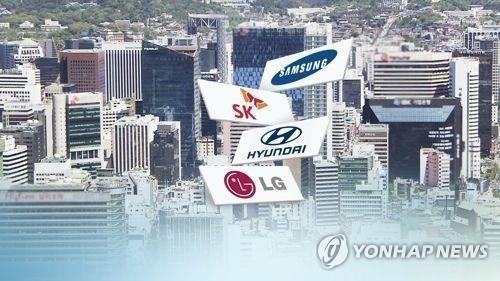