SEOUL, Oct. 5 (Yonhap) -- Apple Inc.'s new smartwatch will be launched in South Korea next week, the U.S. tech titan said Tuesday, as it eyes to beef up its presence on the home turf of its archrival Samsung Electronics Co.

Apple Watch Series 7 will be available here from Oct. 15, with preorders starting from Friday, according to the company.

Apple's latest smartwatch features a nearly 20-percent-larger screen and 40-percent-thinner bezel than its predecessor at 1.7 millimeters.

It has the same 18-hour battery life, like the Apple Watch Series 6, but now offers 33-percent faster charging speed.

The new wearable product is also Apple's most durable smartwatch so far with a crack-resistant front crystal. It is also the first Apple Watch to earn an IP6X certification for resistance to dust and boasts WR50 water resistance rating. 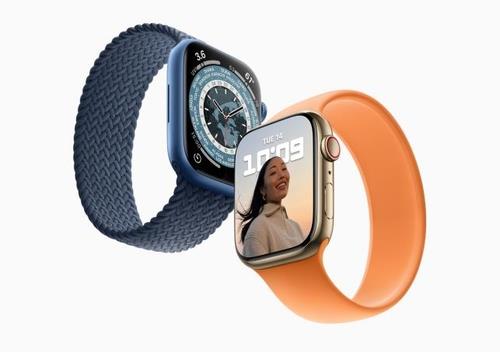 The newest Apple Watch will compete with Samsung's Galaxy Watch 4 that was released in August with new Wear OS, which the South Korean company jointly developed with Google.

The Galaxy Watch4 comes in 40mm and 44mm variants, with the starting price for the LTE models set at 299,200 won here. It also supports features that allow users to monitor their blood pressure, blood oxygen level and irregular heartbeats.

Apple was the world's largest smartwatch vendor with a market share of 28 percent in the second quarter, according to industry tracker Counterpoint Research. Samsung was the No. 3 player with 7.6 percent share behind China's Huawei which registered a 9.3 percent share.