SEOUL, Oct. 5 (Yonhap) -- Lee Jae-yong, the chief of South Korea's top conglomerate Samsung Group, remains the country's richest stockholder despite a fall in the value of his shareholdings, a corporate tracker said Tuesday.

Stock holdings of Lee, vice chairman of global tech titan Samsung Electronics Co., were valued at 14.17 trillion won (US$11.9 billion) as of end-September, the largest among local conglomerate owners, according to Korea CXO Institute.

Yet the value of his stock holdings was down about 1.39 trillion won from three months earlier. Lee suffered the second-biggest drop among.

In May, Lee emerged as the country's richest stockholder after inheriting stakes in Samsung firms from his late father Lee Kun-hee.

The elder Lee died on Oct. 25, 2020, at age 78, more than six years after being hospitalized for a heart attack. He had been the country's richest stockholder for the past 10 years, with his stock value reaching 17.7 trillion won as of late October. 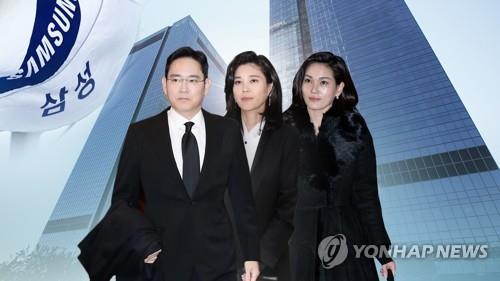 Lee was followed by Kim Beom-su, founder and chief of South Korea's top mobile messenger operator Kakao Corp., with 6.98 trillion won, which was down about 28 percent from the end of June, the biggest decline among the conglomerate owners.

The tumble in Kim's stock value came as Kakao shares have dropped sharply amid controversy over its market monopoly and calls for tougher regulation on the company.

The institute also said the value of stock held by 38 out of the heads of the country's top 50 conglomerates came to 53.12 trillion won as of end-June, down 12.6 percent from 60.81 trillion won three months earlier.
(END)