The group's first studio album, released on Sept. 24, ranked 11th on the Billboard 200 for this week, Billboard said on its Twitter account Monday (U.S. time).

This is the third highest ranking on the chart by a K-pop girl group after BLACKPINK's second and TWICE's sixth.

The five-piece act made it onto the chart for the first time in May, when "Guess Who," its fourth EP, reached No. 148.

ITZY, which has been expanding its fan base in the U.S. since its debut in 2019, dropped English versions of four of its hit singles in January in an effort to reach further into the market.

The girl group managed by JYP Entertainment is one of the up-and-coming K-pop groups in South Korea.

All five main tracks of ITZY's albums have garnered more than 100 million views on YouTube, which is unusual for a three-year-old band, while "Loco," the lead track of the first studio album, already surpassed 66 million views. The album sold about 260,000 copies in the first seven days it was available for purchase. 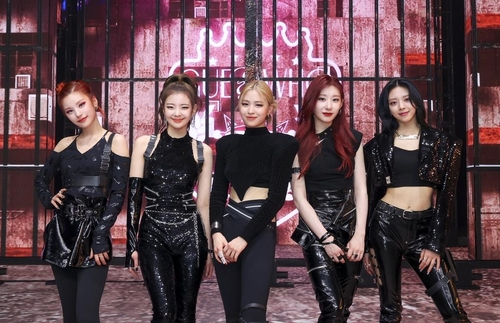 ITZY debuts at No. 11 on Billboard main albums chart with 'Crazy In Love'

ITZY debuts at No. 11 on Billboard main albums chart with 'Crazy In Love'