SEOUL, Oct. 5 (Yonhap) -- President Moon Jae-in said Tuesday that South and North Korea should work together for joint prosperity ahead of eventual unification, signaling a willingness to push actively for cooperative projects with the North after the restoration of inter-Korean hotlines.

Moon made the remark during an address at a ceremony marking the 15th World Korean Day, a day after the North reopened its liaison and military hotlines with the South, which had been suspended since early August due to Pyongyang's protest of a joint military drill by Seoul and Washington.

"There is no reason for confrontation between us," Moon said during the event at a Seoul hotel. "Comparing the political systems or national strengths have no longer become significant. What's important now is to prosper together."

"Unification may need some time, but the South and the North can get along well with each other," he said. 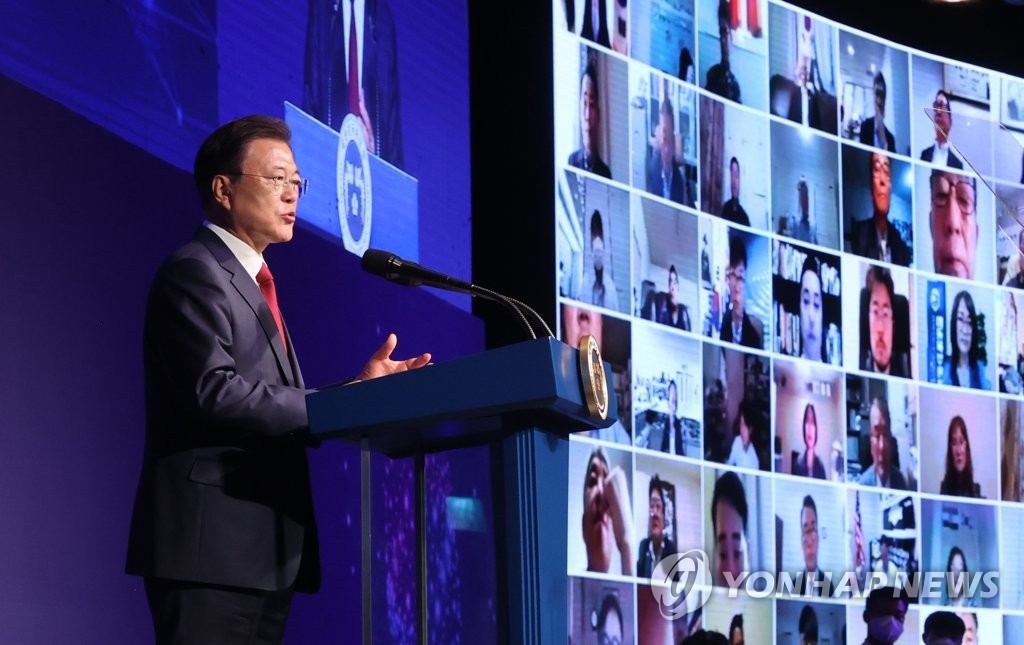 Moon has championed inter-Korean reconciliation and cooperation since taking office in 2017, holding three summits with North Korean leader Kim Jong-un and helping organize the historic first-ever summit between the North and the United States in 2018.

But the peace process has stalled after the second North-U.S. summit ended without an agreement. In an effort to revive the process, Moon proposed during a U.N. General Assembly speech that the two Koreas adopt a declaration formally ending the 1950-53 Korean War.

The Koreas are still technically in a state of conflict as the war ended in a truce, not a peace treaty.

Moon said he dreams of future generations of the 80 million people of the South and North, and 7.5 million overseas Koreans being able to empathize with each other and unite, and asked the Korean community abroad to teach and inform others of the international strength and the possibility of further growth under a unified Korea.

Moon added that overseas politicians with Korean heritage have served as "solid bridges" in advancing peace on the Korean Peninsula, pointing out the elections of four Korean representatives in the U.S. House of Congress last year and Ye-won Rhie, the first German federal parliament member of Korean heritage, in September.

He also shared that he was proud of the popularity of South Korea's soft power, such as K-pop and K-dramas, overseas and stated that the products and content made in Korea have earned trust and adoration from all over the world.

Moon calls for co-prosperity with N. Korea after restoration of cross-border hotlines

Moon calls for co-prosperity with N. Korea after restoration of cross-border hotlines