SEOUL, Oct. 5 (Yonhap) -- Prosecutors are expanding an investigation into a regional development corruption scandal to look into a possible link between a now-arrested key suspect and people above him, including Gyeonggi Province Gov. Lee Jae-myung.

The Seoul Central District Prosecutors Office is investigating whether Yoo Dong-gyu, former acting president of Seongnam Development Corp. (SDC), was given acquiescence or even tacit approval by Lee for how the city's Daejang-dong project, which turned a swath of farmland into apartment complexes, should be operated.

Yoo was arrested Sunday on charges of breach of trust and bribery in connection with the project.

The scandal centers on revelations that a previously unheard-of asset management firm, Hwacheon Daeyu, and its seven affiliates reaped profits of more than 1,000 times their investments after the firm was selected as a civilian partner for the 2015 project.

Yoo, who joined the city-run SDC in August 2014, is suspected of involvement in the selection process as the company's acting president and designing the profit distribution arrangements in a way that benefits the firm while inflicting losses to the city.

Suspicions were raised that Yoo could not be the sole decision maker and manager of the city's high-stakes development project and that Lee must have known the way the project was run.

While the SDC denied the accusations and claimed that it worked on the project independently from the Seongnam city government, a document related to the project was seen signed by then Mayor Lee.

The scandal has been the hottest issue in South Korea in recent weeks amid opposition accusations that Gov. Lee, the front-runner in the ruling Democratic Party's presidential primary, is responsible as mayor of Seongnam at the time.

The relationship between Yoo and Lee dates back to 2008 when Yoo was a manager of an apartment remodeling project in the city. In 2010, he worked in Lee's transition team when Lee was elected the city's mayor and was appointed in 2018 to head the Gyeonggi Tourism Organization after Lee was elected Gyeonggi Province's governor.

Investigators are grilling Yoo over the allegations, trying to secure hard evidence and could possibly launch an investigation into the city government, according to the sources. 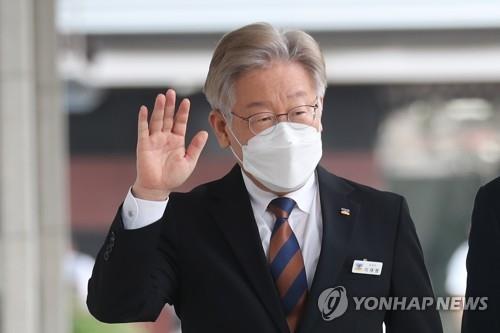