SEOUL, Oct. 5 (Yonhap) -- The South Korean action film based on a true story of the life-and-death escape by South and North Korean diplomats during the Somali civil war in the 1990s will represent South Korea in next year's Oscars.

The Korean Film Council (KOFIC) said Tuesday that it has chosen "Escape from Mogadishu" out of six films as the country's entry for the best international feature film category of the 94th Academy Awards. 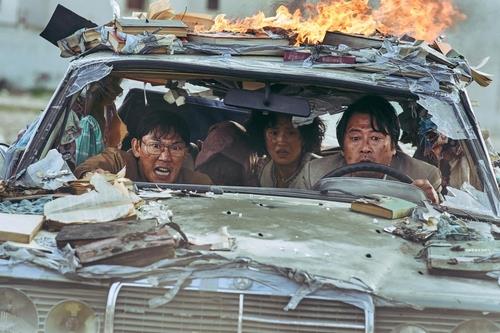 Last year at the 92nd Oscars, South Korea's "Parasite" won the non-English movie section that requires each country to submit a single film as their official representative.

"Based on a real story, 'Escape from Mogadishu' impresses viewers with quality action and suspense, well combined with the dramatic story from inter-Korean tension and cooperation," KOFIC said in a release.

"It has already received rave reviews at home and abroad," it said. "We hope 'Mogadishu' will continue to attract global attention to Korean films initiated by 'Parasite.'"

Directed by Ryoo Seung-wan, "Mogadishu" is about diplomats in South and North Korean missions in Somalia cooperating to escape the country during the 1991 civil war.

It is the most-watched film in South Korea among all films released in 2021, attracting a cumulative 3.1 million moviegoers.

It was invited to this year's New York Asian Film Festival as the opening film.

The 94th Academy Awards is slated for March next year.