WASHINGTON, Oct. 5 (Yonhap) -- North Korea is likely waiting to hear from the United States that Washington is committed to an action-for-action approach toward the complete denuclearization of North Korea, a former U.S. intelligence official said Tuesday.

Andrew Kim, former founding director of the CIA's Korea Mission Center, also insisted that Pyongyang may want to see an official statement from the U.S. that it is ready to sit down for talks without any conditions.

After a monthslong review of its North Korea policy, the Joe Biden administration said it will seek a calibrated, practical approach that explores diplomacy and engagement with North Korea. It has also offered to meet with North Korea anytime, anywhere without preconditions. 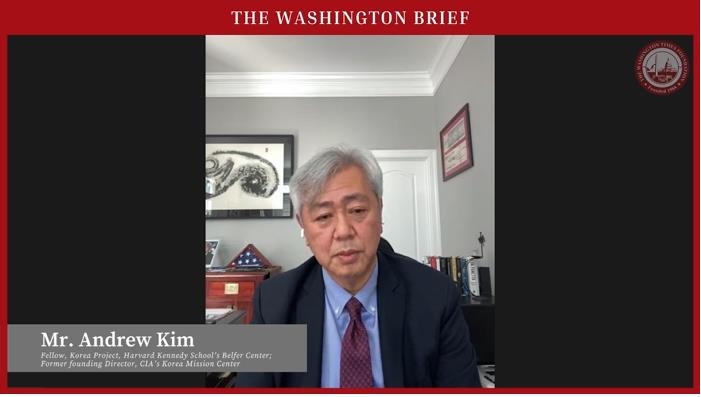 "I'm sure Pyongyang was patiently waiting to hear what the new U.S. administration's North Korea policy will look like," the former CIA official said in a webinar hosted by the Washington Times Foundation.

"The reason I'm saying that (is because) Pyongyang was probably hoping to see more concrete roadmap from the U.S. side, adopting action for action approach, with giving some credit to North Korea for what they have done for the last four years," he added, noting the North has maintained a self-imposed moratorium on nuclear and long-range missile testing since late 2017.

North Korea remains unresponsive to numerous overtures from the Biden administration, while it has also stayed away from denuclearization talks with the U.S. since early 2019.

"They're probably waiting for some kind of a, you know, official statement that we're ready to sit down without any conditions," Kim said.

The North has staged seven missile tests since Biden took office in January, with one of the more recent launches last month involving what it claims to have been a newly developed "hypersonic" missile that Washington condemned as a violation of multiple U.N. Security Council resolutions.

Kim insisted the North was still in a "low key."

South Korea is set to hold its next presidential election in March, with incumbent President Moon Jae-in's single five-year term set to end in May.

Joseph DeTrani, former U.S. envoy to six-party talks on ending North Korea's nuclear ambition, agreed North Korea is prepared to engage and even denuclearize but for the right price.

"North Korea is prepared to denuclearize. However, they're assuming they get their deliverables. They get what they need," he said in the virtual event.

DeTrani also stressed the need for a "catalyst" to reinstitute dialogue with North Korea, such as an end of war declaration that was proposed by Moon at the U.N. General Assembly in New York last month.

"This would be a confidence building gesture to the North."

South and North Korea technically remain at war as the 1950-53 Korean War ended with an armistice and a peace treaty has never been signed.

Kim anticipated that the U.S. and North Korea will be engaged in a "fulsome conversation" within the next two to five years, but said the complete denuclearization of the North "probably will take longer than that."