SEOUL, Oct. 6 (Yonhap) -- Lawmakers were to hold the annual parliamentary audit of the Joint Chiefs of Staff (JCS) on Wednesday, officials said, a day after the planned session for the defense ministry was disrupted due to a partisan strife over a snowballing land development corruption scandal potentially involving the ruling party's presumptive nominee to run for next year's presidential election.

The audit is scheduled to take place at 10 a.m. at the JCS headquarters in Seoul, during which the parliamentary national defense committee members are expected to deal with North Korea's missile and nuclear programs, related military moves and a readiness posture of the South Korean military, according to the officials.

But it is unclear if the session could be held as planned.

On Tuesday, the ruling Democratic Party (DP) boycotted the audit on the defense ministry in protest of the main opposition People Power Party (PPP) lawmakers' picketing campaign at the audit venue calling for a special counsel probe into the snowballing scandal.

The PPP claims that Gyeonggi Province Gov. Lee Jae-myung, who is widely expected to win the DP's presidential primaries that are in the home stretch, should be held accountable for the alleged corruption, as he was the mayor of Seongnam, just south of Seoul, at the time when the development project was launched several years ago. The DP, however, dismisses their assertion as a mere political attack, for now, urging the opposition bloc to wait for the results of the ongoing probe by state prosecutors.

"We will try to hold the audit on the JCS as planned. Given that the JCS is a military entity and its political neutrality must be kept, I ask the lawmakers to make a wise decision," committee chief Rep. Min Hong-chul of the DP told reporters.

The ruling party has criticized the PPP for putting up such political placards though the scandal has nothing to do with defense issues, while the opposition side has argued that the campaign was to ensure the people's right to know, and the scandal can also be considered a military issue as the regional development project may cause losses to the Military Mutual Aid Association.

The scandal centers on revelations that a mysterious asset management firm, named Hwacheon Daeyu, and its seven affiliates reaped massive profits after being selected as a civilian partner for the 2015 project that turned a swath of farmland in Seongnam into apartment complexes.

On Sunday, Yoo Dong-gyu, whom the PPP regards as a close aide to the governor, was arrested on charges that he played key roles in supporting the firm over the course of the project. 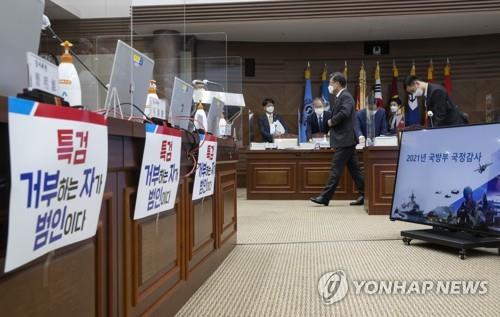